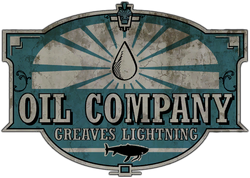 Greaves Lightning Oil is a major business within Dunwall, and a producer of refined whale oil heavily used by the city's modern technologies as well as manufacturing whale oil refill stations and oil tank dispensers.

The company was founded when Ebenezer Greaves established his own slaughterhouse on the Rudshore Waterfront, the Greaves Whale House, and then later the Greaves Refinery to process the raw whale oil. As one of the leading producers of whale oil it became extremely profitable, capable of employing "over 300 workers, not including the children who filled minor, and often tragic, roles," at its operating peak.[1] The company established more slaughterhouses in Dunwall such as the Greaves Auxiliary Whale Slaughterhouse 5 to manage the overflow of the main facility. In the later days of the company, a system of pressure valves was installed to link the refinery to the Rothwild Slaughterhouse, allowing a faster way to transport the raw oil for treatment.[2]

However, when the river barrier broke, both the Whale House and the Refinery were abandoned, with the latter becoming a haven for assassins, weepers, river krusts and even looters interested in the oil tanks abandoned on the premises. It is possible that the whale oil shortage broadcast by the Propaganda Officer is due in part to the collapse of Greaves Lightning Oil, which left other companies such as the Rothwild Slaughterhouse to refine their oil themselves.

Despite its loss, the company outlived the Rat Plague. They however moved their headquarters away from Dunwall while still managing their properties within the capital.[3] Some of them, like part of the Slaughterhouse Row, were shuttered over the years and left abandoned.

Corvo Attano has the option of visiting the Greaves Refinery during the mission, The Flooded District, in order to recover his gear.

A poster for Greaves Lightning Oil at the Hound Pits Pub.

A sign for the Greaves Lightning Oil Company painted on the side of the Greaves Refinery.

Entrance to the Greaves Refinery in the Flooded District.

A billboard for Greaves Lightning Oil in the Backyard of the Office of the High Overseer.

A billboard in Holger Square.

A Greaves Lightning Oil Company logo on the side of a building.

An oil tank dispenser and an oil refill station.
Add a photo to this gallery

Retrieved from "https://dishonored.fandom.com/wiki/Greaves_Lightning_Oil?oldid=166678"
Community content is available under CC-BY-SA unless otherwise noted.