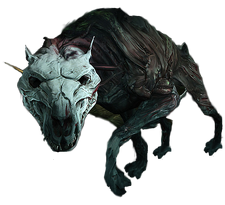 "The supernatural hounds of Brigmore will hunt you relentlessly unless you can discover their secret."
—A hint from a loading screen[1]

Gravehounds are dead wolfhounds that have been reanimated by the Brigmore Witches. The ability to create gravehounds is granted through Delilah Copperspoon's Arcane Bond, though is a hard ability to master, with Delilah favoring those that can. Gravehounds are encountered in the DLC The Brigmore Witches at the Brigmore Manor during the mission Delilah's Masterwork. They make a reappearance in Dishonored 2 during the missions The Royal Conservatory and Death to the Empress.

Gravehounds are only encountered within the grounds of Brigmore Manor and inside, where they function as guards for the coven. Although they can be found patrolling the manor with their mistresses, they are more commonly found as a disembodied, glowing skull found on the ground. Disturbing the skull will cause it to take on its regular form and attack, unless it is destroyed.

If Daud opens the crypt entrance, a pair of witches will call a few gravehounds to keep watch over it with the promise of a "treat".

The gravehounds return when Delilah comes to power and are found guarding important areas for the witches, such as the Royal Conservatory. Several are found within the building and a pair of them guard Breanna Ashworth's office.

Upon the protagonist's return to Dunwall, it is revealed through the witch's dialog that they took advantage of the Overseers' foiled assault on Dunwall Tower by putting down and resurrecting the wolfhounds present. Consequently, there are many gravehound skulls lying in wait in the grounds and several patrolling the Tower's interior. One gravehound sleeps on a bed in the royal chambers and, in high chaos only, another pair stand vigil in front of Delilah's throne.

Gravehounds behave similarly to live wolfhounds, attacking and immobilizing the protagonist if they allow them to come too close. When a gravehound is defeated, it will revert into a skull, which must be destroyed to prevent the gravehound from resurrecting itself. The most common method of destroying a skull is by hitting it with a sword, but it can also be shot by a bolt or bullet. Daud or Emily can also respectively use Pull or an upgraded Far Reach to collect the skull and then throw it, causing it to shatter. Far Reach in particular will cause the skull to be flung past Emily (unless caught manually) causing it to shatter on impact. Skulls are also vaporized by Walls of Light, regardless of the wall's allegiance.

An inactive gravehound skull will be immediately activated should the protagonist get too close. This will also alert any nearby enemies, including other inactive skulls.

Active gravehounds are unusually perceptive as they can detect the protagonist on the chandeliers during the final mission of Dishonored 2, where the witches and the Clockwork Soldiers cannot.

Gravehounds directed by a Brigmore witch.
Add a photo to this gallery

Retrieved from "https://dishonored.fandom.com/wiki/Gravehounds?oldid=150717"
Community content is available under CC-BY-SA unless otherwise noted.