The Grand Guard, also referred to as the Grand Serkonan Guard, serves as both the military and City Watch alongside other groups on the isle of Serkonos, akin to a gendarmerie. The Guard has connections to the Greater Serkonan Guard and the Stewards of Cullero, the three of which are tasked with the protection of the Isle of Serkonos.[1] The Guards carry out many different duties such as crime investigations, dealing with bloodfly issues, protecting important figures and locations, and acting as port guards[2]. Some of the notable units include the "First Attachment to the Duke" which serves as the Duke of Serkonos' personal guards and led by chosen officers,[3][4] and the "Palace Civic Patrol" which guards the Palace District and the only land route leading to the Grand Palace[5]. The Guards also have a division called "Technical Office" which manages high-tech equipment such as windmills and clockwork soldiers, and issues manuals to other units.[6][7]

Like City Watch of Dunwall, the Grand Guard are armed with pistols and swords. Members of the Grand Guard have differing uniform colors: red and bluish-grey, which denote specific ranks and positions. Members of all ranks may wear protective helmets, though not all do.

Elite Guards and Veterans only:

Concept art for a regular guard.

A Veteran of the Grand Guard.

The Grand Guard in the Dishonored 2 E3 Trailer. 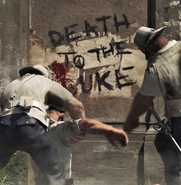 Guards handle corpses in the streets.

Grand Guards before executing a group of civilians.

The Grand Guard shout an alarm as Emily battles the Clockwork Soldiers.

A Grand Guard next to Delilah Copperspoon as she confronts Emily.

Emily mesmerizes members of the Grand Guard on the streets of Karnaca.

Emily using Far Reach to sneak up on members of the Grand Guard.

A lone Grand Guard patrols the front of the Conservatory.

The Grand Guard patrolling the streets of Karnaca.

A Grand Guard being attacked by Devouring Swarm.

A guard, similar in appearance to the Dunwall City Lower Guard.

A variant of said guard

A Guard with a helmet, note the bandage on his cheek

Another Guard variant with facial burns.

Yet another Guard variant.

A guard wearing a face covering and goggles in the Dust District.

Blond guards are rare, with this one sleeping off a night of boozing at the palace.

A male Elite Guard guarding a windmill near the Royal Palace.

A female Elite Guard investigating an area with her sword out.

An explosive bullet fired by a Veteran.

An honour guard to welcome the Duke to Dunwall Tower

An Elite Officer watches over her detachment