"He is swept up in events too large for him to comprehend."
—The Heart

Geoff Curnow is a Captain of the City Watch, adoptive father to Jameson Curnow, and the uncle of Callista Curnow. He traveled with Corvo Attano on his journey across the Empire to find aid against the rat plague and is present during the prologue.

Curnow appears again during the mission High Overseer Campbell. Callista suspects that there is a plot by Thaddeus Campbell to poison him, as he is one of the few remaining uncorrupted men in service to the city, and she asks Corvo to keep him safe. Callista's fears are realized when Campbell has Curnow's wine laced with poison prior to a private meeting; Corvo can choose to save Curnow, or let the assassination take place.

If Curnow survives Campbell's assassination attempt, and if Corvo follows the low chaos path, Curnow can be seen embracing Callista when they reunite. 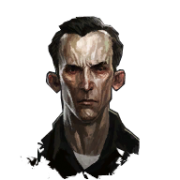 Curnow's target portrait for his side mission.

Curnow and Corvo return home from their trip.

Curnow in the waterlock. 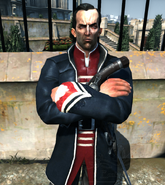 Curnow during the prologue. 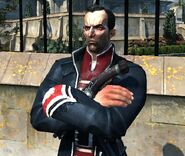 Campbell and Curnow in the Office of the High Overseer.

Curnow and Campbell have a meeting.

Curnow escapes from the meeting room.

Curnow is stabbed in the back by Campbell.

Geoff's reunion with Callista in the low chaos ending.

The gameover screen from possessing a poisoned Curnow.
Add a photo to this gallery

Retrieved from "https://dishonored.fandom.com/wiki/Geoff_Curnow?oldid=168183"
Community content is available under CC-BY-SA unless otherwise noted.