General Tobias is a high-ranking Dunwall officer of the army (with additional authority over the City Watch) who serves at Dunwall Tower under Hiram Burrows.

General Tobias is in charge of security at the Tower and acts with the full authority of the Lord Regent in matters regarding it; his office issues the decree shutting down all unofficial traffic to Dunwall Tower, for instance, and makes the building inaccessible by any means other than the water lock.

He has a small office at Dunwall Tower, but he mostly spends his time ensuring the safety and security of the Tower by checking on his men, who patrol the halls.

Tobias is first seen conversing with Burrows over a viewing screen in the Tower foyer, and can thereafter be witnessed checking on various guard units throughout the Tower. At the end of his rounds, provided Burrows has not retreated to his safehouse, Tobias will meet him in his quarters to discuss Tower security and the status of the masked assassin investigation.

A close up of General Tobias. 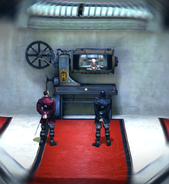 General Tobias and an Officer speak to Hiram Burrows.