"Amelia, dear, if Breanna hears you and her mood is off, you're going to lose an eye making fun like that."
—Francesca, warning Amelia in front of the Royal Conservatory.

Francesca is a minor character who appears in Dishonored 2. She is one of several witches loyal to Delilah Copperspoon encountered during the mission The Royal Conservatory.

During the time when Emily Kaldwin or Corvo Attano goes to the Royal Conservatory to deal with Breanna Ashworth and the Oraculum, Francesca is one of several witches tasked with guarding the museum.

She can initially be found outside the Conservatory's main entrance with Amelia, and other of her sister witches. 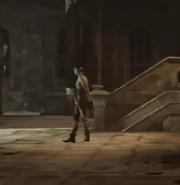 Francesca patrols the grounds in front of the Royal Conservatory.

Francesca berates Amelia for mimicking Delilah.
Add a photo to this gallery

Retrieved from "https://dishonored.fandom.com/wiki/Francesca?oldid=140663"
Community content is available under CC-BY-SA unless otherwise noted.