Fish are a group of aquatic animals that live in the waters of the world.

Hagfish are predatory fish known to dwell in the Wrenhaven River. Hagfish will bite if the protagonist swims too close to them. Additionally, any unconscious or dead bodies thrown into waters containing hagfish will be eaten. They are most useful to Corvo Attano because of their ability to be possessed.

Some establishments, such as the Golden Cat, keep ornamental fish. Fish are also a food source for the people of the Empire, as tins of jellied eels and hagfish can be found and consumed. There are also some extremely large but unnamed fish being served to the guests at Lady Boyle's Last Party. They bear a resemblance to sturgeons and nurse sharks.

Redshark are larger carnivorous fish which live in Karnaca's bay. They are comestible and one of the products of the Santiago Fisheries and the various fish markets across the city. Preserved specimens are also displayed at the Royal Conservatory.

Some smaller red fishes can be found in the bay and canals of Karnaca. While carnivorous, they only prey on corpses and don't attack living things.

Side view of a hagfish.

A hagfish in the river.

Close up of a hagfish.

Hagfish eat the body of a Lower Watch Guard.

A dead fish on the banquet table at the Boyle Mansion.

Hagfishes swimming in the Void. 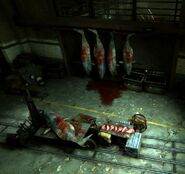 Closeup of the hanging sharks.

A shark at the Rothwild Slaughterhouse.

A dead fish at the Rothwild Slaughterhouse.

A dead fish on the deck of the Undine.

A fisherman gutting a set of large plated headed fish in Karnaca.

An advertisement for brined hagfish.