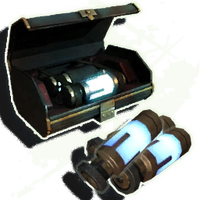 Explosive bullets are a special type of ammunition for the pistol that explode upon impact, dealing considerably more damage than normal bullets.

Similar to regular bullets, explosive bullets are propelled via the controlled detonation of a miniature reservoir of whale oil in the base of the round, launching the head towards the target.

Utilizing a chemical process to stagger combustibility rates, these bullets are engineered to keep the first explosion from triggering the larger reservoir, allowing it to impact with the target and cause extreme damage. Explosive bullets are the most powerful type of ammunition available to Corvo Attano and Emily Kaldwin, and are capable of killing tallboys and Clockwork Soldiers in a single, well-placed shot.

One drawback of the explosive bullet is that the maximum clip size is one, despite any upgrades. Also, due to it being categorized as special ammunition, Corvo can only carry ten at a time in Dishonored. In Dishonored 2, the protagonist can carry five to start with, and each normal bullet capacity upgrade increases this number by two, allowing for a total of nine to be carried.

Explosive bullets can normally be purchased from Piero Joplin or black market shops once the protagonist has found the Small-Scale Combustion Refinement blueprint. In Dishonored, one case of explosive bullets can be found in the mission The Light at the End. In Dishonored: Definitive Edition, another case was added to a pillbox on the northernmost (as seen from the map) strip of land of Kingsparrow Island. In Dishonored 2, Kirin Jindosh and some Grand Guard Veterans fire explosive bullets, and while it is not possible to loot from their bodies, Bend Time can be used to catch the bullets in mid air.

In Dishonored, these rounds can only be used if the Corvo's Pistol upgrade has been purchased from Piero. In Dishonored 2, explosive bullets can be upgraded to release five fragments upon impact. These fragments fly away from the original impact and fall to the floor, there exploding to deal additional damage. These secondary explosions are capable of knocking the protagonist over.

*These upgrades only increase the storage capacity of explosive bullets by two each, for a total of nine carried. 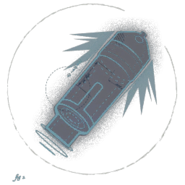 Icon for explosibe bullet in Dishonored 2.

Concept illustration of an explosive bullet. 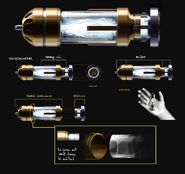 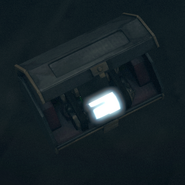 The only case of explosive bullets in Dishonored.

Concept of explosive bullets in Dishonored 2.

Esmond Roseburrow's pistol which appears to be loaded with an explosive bullet.

A Grand Guard veteran firing an explosive bullet.
Add a photo to this gallery

Retrieved from "https://dishonored.fandom.com/wiki/Explosive_Bullets?oldid=165962"
Community content is available under CC-BY-SA unless otherwise noted.