Esmond Roseburrow is a natural philosopher, known for discovering the use of whale oil as an energy source, sparking Dunwall's industrial revolution. Originally, Roseburrow was a natural philosopher whose ideas were practically rejected throughout the Isles. Forced into poverty, he took shelter by residing in the whaling grounds. During those times, whales were possibly used for different reasons (food, ambergris) and their oil was only used as nothing more than a flammable liquid, used for creating fires easily. Yet when Roseburrow observed several poor commoners huddled around a fire--created by someone spilling the oil, he deduced the potential for whale oil to become an industrial fuel source. His discovery propelled him from obscurity and poverty to leading an industrial revolution, providing the Isles with technological advancements from simple electric lighting to motorized, horseless carriages that ran on rails, as well as ships that could travel great distances using onboard motors. He created his own company, Roseburrow Industries, headquartered in Dunwall, the place where his discovery was made, now the most industrialized city in all the Empire. Following his initial wealth and success, he sponsored a young Anton Sokolov's first efforts at developing technology powered by trans.

This led to great leaps in weaponry and military machinery, all used by the authoritarian government to exert an unprecedented level of control over the city's citizens. Roseburrow was "never comfortable with his ultimate legacy and lived the last of his days in despair" over the consequences of his and Sokolov's work.

Feeling guilty over the decline of Dunwall and its people, Roseburrow committed suicide by shooting himself in his office. [1] 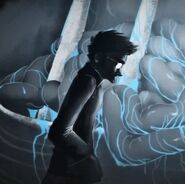 A side image of Esmond.

Esmond, before he commits suicide.

A photo of Roseburrow Industries.
Add a photo to this gallery

Retrieved from "https://dishonored.fandom.com/wiki/Esmond_Roseburrow?oldid=20462"
Community content is available under CC-BY-SA unless otherwise noted.