Eolina Rey is a minor character and tattoo artist in Death of the Outsider. She owns the Red Camellia, a beauty and tattoo parlor in Upper Cyria.

Rey started out by opening a small hairdressing shop by the parlor, but quickly expanded, eventually setting up shop in the elite Upper Cyria District and serving customers from all over the Empire of the Isles.[1]

By 1848, Rey was involved with the Eyeless Gang, being responsible for tattooing their members.[2]

Rey is romantically involved with Shan Yun, a Tyvian opera singer. She met him when Aranda, a member of the Eyeless, sent him to get tattooed. While she knew who he was and what he looked like, she was not prepared for just how handsome he was.[3] During one of her latest visits, Yun explained his musical lock to her. While he did not correct her mistake of thinking that live singing was required, he still changed the key to a different song.[4] Shortly before the mission Follow the Ink, she attempted to visit his house but Yun's servants refused her access as Yun had told them not to admit anyone while he was composing. Realizing his mistake, Yun sent her a letter detailing a secret knock that would get her admitted immediately.

Over two months before the events of Death of the Outsider, Rey ordered a vial of Liminal Blue from Pintaral Imports. Despite their assurances, it had not arrived by a suitable time. Just before Follow the Ink, Rey wrote a letter telling them they had until Friday to deliver it or she would go to a competitor of theirs, Oppueto Exotics, for future deliveries.

Rey has had some issues with Martina, an employee at the Red Camellia, using krust-shell powder disinfectant against Rey's repeated instructions. Just before the Follow the Ink mission, Rey was forced to shut the Red Camellia and make Martina clean the entire place after Lady Cottington ended up with weeping blisters on her stomach.[5]

When Billie Lurk arrives in the Upper Cyria District, Rey is in her house, listening to one of Yun's audiographs, Born in the Month of Darkness. Due to the volume, Rey has reduced audio perception, allowing Billie to sprint without Rey being alerted.

Earlier in the day, Rey left a letter on the door to Yun's house, telling him she would be visiting later with a bouquet of flowers from the florist below her house. She said she would use the secret knock, but asked him to ensure his servants would admit her straight away. 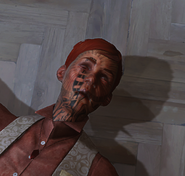 The tattoos on Rey's face.

An advertisement for Rey's tattoos out the front of the Red Camellia.

Rey's salon, the Red Camellia.
Add a photo to this gallery

Retrieved from "https://dishonored.fandom.com/wiki/Eolina_Rey?oldid=170409"
Community content is available under CC-BY-SA unless otherwise noted.