The rightful heir to the throne of Gristol and the Empress Jessamine Kaldwin's only child, Emily Kaldwin was present as her mother was killed by the supernatural assassin Daud, on the orders of the Royal Spymaster and Lord Regent, Hiram Burrows.

She has an immensely close bond with the former Lord Protector, Corvo Attano, and depending upon his actions and the amount of chaos that Corvo spreads, it will determine the final outcome of Emily's actions – or inaction – upon the Empire.

Following her mother's death, Emily is seen reading a book in an unknown destination. Soon after, she is held hostage by the Pendleton twins in the Golden Cat pleasure house, during the mission House of Pleasure. Subsequent to this event, Callista Curnow becomes her caretaker. 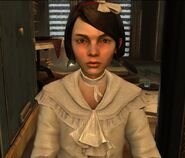 Emily struggling against the Pendleton twins in the Void, at a place reminiscent of the Golden Cat.

Emily and the twins within the Void.
Dishonored-E3-Trailer.jpg
Corvo reaching out to Emily.

Emily's drawing of her mother.
Add a photo to this gallery
Retrieved from "https://dishonored.fandom.com/wiki/Emily_Kaldwin?oldid=17075"
Community content is available under CC-BY-SA unless otherwise noted.