"So I get to stay in a smaller tower while I live here? That'll be good practice."
—Emily, comparing her tower to Dunwall Tower

Emily's tower is a building located near the Hound Pits Pub, beside Piero's Workshop and connected to Corvo Attano's quarters via an elevated bridge of scrap metal.

After Corvo rescues Emily Kaldwin from the Golden Cat in the House of Pleasure mission, Emily and Callista Curnow take up residence in the tower. If Corvo chooses to visit the tower when returning to the Hound Pits Pub between missions, information about Emily can be found there in the form of items, books, notes, and audiographs. Additionally, some interactions with Emily and Callista that take place exclusively in the tower help to give Corvo a glimpse into Emily's daily life and adjustment after the death of her mother.

If Corvo's chaos is low at the start of the mission The Loyalists, he will find Callista barricaded in the tower, hiding from Farley Havelock's City Watch forces. Regardless of chaos, the flare gun Corvo needs to signal Samuel Beechworth is found here during the same mission. 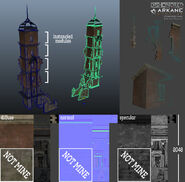 Renders and textures of the tower.

The door to Emily's tower.

The walkway leading to Emily's tower.

The far side of Emily's Tower.

Emily's Tower seen from the waterfront.

Emily's Tower view from above. 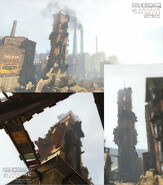 Emily and Callista in the tower.

Emily sleeping in the tower.

A pre-release image of Emily's tower.

Emily's Tower in the Void.

The interior of Emily's Tower in the Void.

Emily's drawing of her tower in low chaos.

Emily's drawing of her tower in high chaos.
Add a photo to this gallery
Retrieved from "https://dishonored.fandom.com/wiki/Emily%27s_Tower?oldid=143564"
Community content is available under CC-BY-SA unless otherwise noted.