The Good Doctor
Edge of the World is the second mission in Dishonored 2, in which Emily Kaldwin or Corvo Attano is tasked with making their way through the streets of Karnaca to Addermire Institute, where they will eliminate the Crown Killer and investigate Anton Sokolov's whereabouts.

Something feels off. Find out what is going on.

Meet with Meagan Foster and discuss a plan of action, before taking the skiff to Karnaca

Find Addermire Station and take a carriage to Addermire Institute. It is the best lead you have to taking down the "Crown Killer".

Emily or Corvo will wake up in a different version of their cabin on the Dreadful Wale. An attempt to open the cabin's door will fail as it is blocked, but upon turning around the opposite side of the room will open to the Void. Emily or Corvo meet the Outsider, who offers them his Mark. The protagonist can either accept his offer or reject it.

The next path within the Void will be constructed differently, depending on whether Emily or Corvo accepted the Outsider's offer of his Mark:

Continuing through the Void, Emily or Corvo find the Heart. Once Emily or Corvo pick it up, the spirit within the Heart is recognized as that of Jessamine Kaldwin. The Heart may be used to find a shrine with two runes, which must be taken before Emily or Corvo can leave the Void.

The protagonist wakes up in their cabin aboard the Dreadful Wale, this time in the real world and anchored off the coast of the Karnaca Harbor. They have the choice of writing down their travel log next to which lies a soon-to-be sent letter. Two bonecharms as well as a book and a Serkonan guitar will be present on the desk as part of the Imperial Assassin's Pack. Opening the cabin's door will let the protagonist collect their newest crossbow, courtesy of Sokolov, as well as a note from Meagan and 100 coins (600 with the Imperial Assassin's Pack).

The protagonist can then explore the ship, peruse through the personal logs of Meagan and Sokolov or unlock the blocked cabin which contains a few resources. The Heart can be used to find a hidden rune in a sunken barge near the Dreadful Wale. Meagan awaits in the cargo hold to share her knowledge of Delilah's coup, Sokolov's abduction and the current state of Karnaca. Once finished, she leads the protagonist to the ship's skiff, ready to bring them on shore.

Meagan Foster sails the skiff to the Campo Seta Dockyards in Karnaca. From there, the protagonist can slowly make their way to Addermire Station via Canal Plaza, blocked off from the dockyards themselves via a wall of light. Exploring the dockyards is highly recommended, revealing a large number of valuable or useful items. Mindy Blanchard is located behind the district's black market shop, and talking to her unlocks a way to access Addermire Station later on in the mission.

Bypassing the Wall of Light

There are several ways to pass the wall of light: swimming around it, climbing over it, bypassing it through the neighboring building, climbing around it, deactivating it, or working through a bloodfly-infested apartment.

To swim, the protagonist must make their way to the right-most part of the dockyards and then enter the water. If they continue swimming, they will find two chains leading up a wall. Climbing these chains will place the protagonist in Canal Plaza.

To climb over, the protagonist must use Blink or Far Reach from the nearby balcony or a street light to access an open window directly above the wall of light. Passing through it, they will enter a small passage that leads through another open window to the other side.

To pass through the neighboring building, the protagonist must turn right from the wall of light and enter the only building that is accessible there, either through the front door or by climbing in via balcony. In Amadeo Monte's apartment, a balcony door leads out to Canal Plaza and is barred only by a wooden panel. Breaking it allows access to the other side.

To climb around, the protagonist must first climb onto the rightmost balcony of Monte's apartment. From there, judicious use of Blink or Far Reach, Agility, and the windowsills and ledges of the nearby buildings allows them access to the rooftop around the corner. From there, Canal Plaza and the Overseer Outpost can be reached.

To deactivate the wall of light, the protagonist must enter the hostile area past lots of hanging fish and reach the top of a windmill, there pulling the lever to deactivate it. This will cause the nearby guards to become alerted and began to search the area.

Once the protagonist has entered Canal Plaza, they must pass by the Overseer Outpost to reach a safer area inhabited by civilians, just before Addermire Station. There are a number of ways to do this, the safest probably being to reach the titular canal running down the middle and swim along it, climbing out near the drain at the other end and going through the gate into the small market. Depending upon how the protagonist approached Canal Plaza, they may have to pass a few Grand Guards or Overseers.

Another way to reach the market is to climb along the top of the building on the seaward side of the plaza. There are two Overseers on top of the Overseer Outpost, but all the other buildings are safe.

Passing directly through the plaza itself is also an option, though the protagonist will have to watch out for a number of Overseers and Grand Guards in the area. The market is not the only way out of Canal Plaza: there is another door on the same side of the canal that leads more directly to Addermire Station, though a high Grand Guard presence makes this more challenging for a low chaos approach.

There are also numerous benefits to exploring Canal Plaza: runes, bone charms, a blueprint and a Sokolov painting can all be found in the area, with the Overseer Outpost holding most of these valuable items. It also has the corpse of Amadeo Monte, needed for Blanchard's quest.

The carriage station can be accessed in one of three ways. Firstly, the wall of light sealing it off can be deactivated from inside the station itself, either by approaching through the front door, which is guarded well, or from the skylight in the roof.

However, if the protagonist is on the roof, they may as well bypass the station completely and jump down to the cover over the target carriage out the back of the station. The roof can be accessed from nearby street lanterns, which in turn are easily accessed from Alexandria Hypatia's apartment, above the Winslow Safe Company store. Go to the balcony and use Blink or Far Reach to get to the top of the carriage station. Note that there are three guards on the roof. Two can be avoided with relative ease, though the third is more challenging, and can even spot the protagonist in Hypatia's apartment.

Once the protagonist has made their way through the carriage station, they must climb into the carriage to head to the Addermire Institute, ending the mission.

Alternate view of the Dockyards.

The route leading from the Dockyards.

The entrance to a bloodfly-infested apartment.

The exit from the bloodfly-infested apartment.

The room inhabited by Luciano, now a Nest Keeper.

A windmill powering the wall of light.

An alternate view of the plaza.

A surgeon's operating room in the plaza.

A fish market near Addermire Station.

A map of the Campo Seta Dockyards. 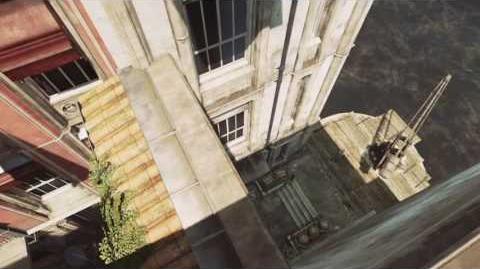