"There is a strong drink made here. I tried it once. Distilled from River Krusts by the taste of it."
—The Heart[1]

The Dunwall Whiskey Distillery was the headquarters of Dunwall Whiskey, a major company within Dunwall which produced whiskey and other alcoholic beverages. By 1837, the distillery was owned by Slackjaw, who used it as a base and source of income for his Bottle Street Gang.

In their early days, after winning a bitter war with the Hatters, ownership of the distillery switched to Slackjaw and the Bottle Street Gang.[2] Due to the rat plague, Slackjaw decided to use the distillery's elixir still to brew a bootleg version of Sokolov's Elixir made from sugar water, beechgum paste, and full-strength elixir.[3][4] The concoction is then sold at a large mark-down, making it affordable for those who cannot purchase the genuine brand. A report to Anton Sokolov also claims that some members of the City Watch purchase the bootleg elixir to supplement their dwindling rations.

The distillery itself is a large building accessed from a yard on Bottle Street, hence the gang's name. The yard is split into two main sections, which are mostly open, and a number of smaller buildings surround it. There is sometimes a trap set up near the yard's entrance, and a few supplies on top of the building on the left side of the yard. There is a small platform just before the door to the distillery itself, and a small cell-like room off to the side. A large crane is attached to the side of a building for moving barrels of whiskey around.

Upon entering the distillery, there are two small rooms, with the main brewing area beyond that and a control room off to one side. The brewing area is a large space, filled with six vats of varying sizes, and a number of pipes and cranes with chains hanging off them. There is a main floor, with the three larges vats and a storage area, and a smaller floor above the storage area with the smaller vats. Thugs wander both floors, patrolling and chatting. The control room, which has another storage area in, this one behind a large door, overlooks the brewing floors. Beyond this area is the distillery reserve, the storage area for all the barrels of whiskey. Slackjaw has made his office below some stairs in the reserve. It is in this office that the elixir still is placed.

Corvo Attano can visit the distillery during Dishonored's missions High Overseer Campbell and House of Pleasure. During the former, it is part of a side mission for Granny Rags, who has asked him to poison the elixir still. While there, he has the option of making some elixirs beforehand, which have the same gameplay function as the normal elixirs.

During the mission House of Pleasure, Slackjaw summons Corvo to his office in the distillery with a proposition: find out what happened to Crowley and he will provide Corvo with the key to the Captain's Chair Hotel. Upon completion, Slackjaw gives a second offer: get him into Bunting's safe in his apartment and he will dispose of the Pendleton twins.

The door leading to the distillery from the Distillery District.

The break area in the yard.

A room in the Dunwall Whiskey Distillery.

A closed-off room in the distillery. 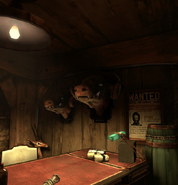 A hallway and storage area in the back of the distillery.

The lower level of the distillery. 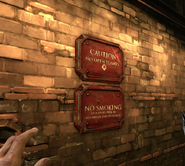 Warning signs in the distillery.

Bottle Street thugs in the Dunwall Whiskey Distillery.
Add a photo to this gallery

Retrieved from "https://dishonored.fandom.com/wiki/Dunwall_Whiskey_Distillery?oldid=150113"
Community content is available under CC-BY-SA unless otherwise noted.