Dunwall Tower is the principal residence of the ruler of Dunwall.

It features a hydraulic waterlock where small boats can dock. The center of imperial governance, the tower is situated on a cliff overlooking the river, and is connected by drawbridge to Coldridge Prison.

Within the tower are spacious hallways lined with paintings, the royal bedroom, a music room, a small place of worship with the Seven Strictures inscribed on the walls, kitchens, a balcony and a dungeon. Outside the tower is a courtyard with a gazebo.

It was at the gazebo where the Empress Jessamine Kaldwin was murdered by Daud and his assassins. Following this, the empress was buried on the spot where she was murdered. During the reign of Lord Regent Hiram Burrows, the tower became much more advanced in terms of infrastructure, heavily reflecting the regent's egomania and paranoia. The tower was almost completely covered in a metallic encasing, with the Lord Regent specially residing in a saferoom built at the top of the tower, where he would often plan with his generals.

Both inside and outside the tower, Sokolov technologies were deployed for additional security, in the form of Arc Pylons, Walls of Light, and watchtowers. A combination of guards, Overseers and Tallboys would constantly patrol the tower, both inside and outside. The Lord Regent also commissioned statues and busts of himself to be built on tower grounds, and a broadcasting center was created to transmit regency propaganda over Dunwall's speaker system. Due to the regent's paranoia, a special television-like apparatus was created to allow him to communicate with his guards from his saferoom.

Corvo Attano visits this place during the prologue and Return to the Tower.

The tower is heavily based on the Tower of London and Edinburgh Castle.

Map of the inside of Dunwall tower.

Dunwall Tower from the front.

A stairway to a lower plaza in the Dunwall Tower courtyard. 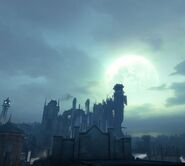 The foyer of Dunwall Tower.
Add a photo to this gallery
Retrieved from "https://dishonored.fandom.com/wiki/Dunwall_Tower?oldid=20512"
Community content is available under CC-BY-SA unless otherwise noted.