"Dunstan! The Pendletons are here! You're supposed to be on duty."
—An irritated courtesan to a passed out Dunstan

Dunstan is a minor character and a member of the City Watch of Dunwall who appears in Dishonored during the mission, House of Pleasure.

Dunstan is a City Watch Officer whose duties are to patrol and guard the the Golden Cat bath house, a pleasure establishment located near the Distillery District. He is found during the House of Pleasure mission on the second floor of the Golden Cat, to the left of the entrance to the Silver Room.

During the time in which Corvo Attano arrives at the bath house to deal with the Pendleton twins, Dunstan is scheduled to be on duty. However, he managed to drink too much right before Corvo’s arrival and is found sleeping by a courtesan in the employ of Madame Prudence.

His attire is that of the typical City Watch Officer, and not the light blue of the officers under the employ of the aristocracy. This along with the remarks of the courtesan as she tries to waken him suggest he is either employed directly by the Golden Cat, or is assigned to patrol the area immediately outside the bath house, as opposed to being in the employ of the Pendletons. 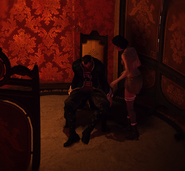 Dunstan is caught sleeping by a courtesan.

The courtesan tries to wake Dunstan.

Dunstan, lashing out in his sleep. 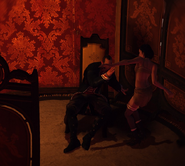 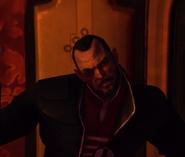 A pre-release picture of Dunstan and the courtesan.