This article is about the mission. You may be looking for the video game Dishonored.

Dishonored is the first mission of Dishonored, in which Corvo Attano must escape from the confines of Coldridge Prison and meet Samuel Beechworth by the Wrenhaven River.

Six months have passed since you were accused by the Royal Spymaster of murdering the Empress and conspiring to abduct her daughter Emily, the royal heir. Now, locked away in Coldridge Prison, the time of your execution draws near.

You have escaped Coldridge Prison with the help of hidden allies. If you can reach the Wrenhaven River, they promise to aid you in your next move.

On the eve of Corvo's execution, Watch Officer Thorpe will deliver a tray of food to his cell and urge him to eat, saying the meal "comes from a friend." Hidden underneath the bread on the tray is an anonymous message and the key to Corvo's cell.

He will then use the key to unlock his cell, and directly outside is a table with a sword on it. There are three guards patrolling the corridor ahead. The first can be eliminated and his body hidden while the latter two are conversing, but the others will require Corvo to wait until they have finished their conversation for him to dispatch them without being noticed.

There is a bridge over the corridor that leads to the yard walkway, which can be accessed by either climbing or taking the stairs. Upon climbing, a pistol can be looted from a weapons rack, along with some food and coin.

The door at the end of the bridge will be locked, and Corvo must pickpocket a guard to procure the key. That done, the walkway leads to a room with another guard and two doors after it: the interrogation room and the courtyard. The latter will be locked for the time being, until the current objective is completed. To accomplish this, Corvo must enter the interrogation room to fetch the clockwork explosive, which is contained within the safe at the back of the room.

After fetching the explosive, Corvo will witness one of the City Watch guards entering the yard, where he will begin a conversation with a Lower Guard named Hackworth. Corvo can sneak around them by hiding behind the different obstacles in the room, or by picking each off while the other cannot see. From this point, he can take the stairs at the other end of the yard, which lead to the prison's control room.

In the control room, there will be two options available to Corvo. He can either dispatch the guards in the room and pull the lever to open the door, or he can climb onto some pipes opposite the offices and traverse into the next room. If a body is previously placed in front of Corvo's cell, it may attract the guards' attention and lure them away.

Corvo will need to dispatch the two guards in the room, and can then plant the explosives on the door to escape. If Corvo chose to open the door to enter the room, he can use the lever in this room to close it behind him; this will hinder any guards left in the facility from entering following the explosion, giving Corvo more time to escape or hide.

(Clean Hands note: There is a dumpster next to the outer door, and if an unconscious guard is placed in it, the explosion will kill him, locking the Clean Hands achievement/trophy. An effective hiding place is the open wolfhound cage, to the left of the gate when Corvo first enters.)

(High Chaos note: After blowing up the door, guards will spawn and enter the room, searching for Corvo. As guards are killed, new ones will spawn. There is no limit to the number of guards that can respawn at this point. Corvo can hide deep in the storage container to the left of the door, on the side closest to the wall, shielding himself from most attacks. From here he can attack the guards between their attacks.)

When the door to the prison's forecourt is destroyed, Corvo must dive into the water and swim to the sewers' entrance.

(Ghost note: There are guards watching the water after Corvo jumps off the bridge. To not be seen, he may have to wait underwater until the guards' awareness levels have dropped and then sneak to the sewers. To do this successfully may also require him to watch the guards as they change position, timing his movements accordingly. There is a chance that they will be watching for activity near the main door, at which point he can sneak past.)

Shortly after entering the sewers, there will be a note, as well as a locked gate to a cell blocking the path. Corvo will need to climb the cell and crawl through the small space overhead. A swarm of rats will convene below, and two guards on the other side of another cell door can be heard talking about Corvo. As Corvo approaches the door, the guards will open it and will be attacked and consumed by the rats.

Corvo can then descend from the top of the cell and dive into the water nearby. On swimming through the sewer outlet, there will be a dead couple curled together if Corvo turns back, with a journal laying beside them. Following this, there is a crank wheel that Corvo must turn to continue ahead, which can be operated by lifting away the corpse that is leaning on it. This crank will open up a passage to a cistern, where some City Watch guards will throw two corpses from above.

Corvo will need to avoid the rats by circling around the area, and then quickly make his way onto the platform in the middle. Here he can pick up and throw one of the corpses away from the crank wheel, in order to distract the rats, giving him the opportunity to open the gate.

Progressing on, Corvo will need to climb a chain, and there are some items at the top that can be looted. However, Corvo must be cautious of the two traps in the area that are activated by tripwires. To disable them, he can throw some debris such as an empty bottle at the wire or interact with the wire and dodge out of the way of the launched bolt. Alternatively, he can locate the launchers and disable them, which give one incendiary bolt each.

Corvo then finds a weapons stash and a note to him from the Loyalists, which mentions that a crossbow and a sword have been constructed for his personal use. Following this, Corvo can also unlock the door next to him with a key provided.

After sliding underneath a tripwire, the next group of guards in the sewers can be dispatched as per usual, or avoided completely by swimming underwater. Following Corvo's interaction – or non-interaction – with them, only a short tunnel separates him from the sewer exit. Samuel will be waiting there to transport him to the Hound Pits Pub.

Upon approaching the Hound Pits, Samuel tells Corvo about the Loyalists and their plan, mentioning that they are hiding "right under the Lord Regent's nose." Though he worries about the City Watch breaking in one day, Samuel tells Corvo of his faith in Farley Havelock, assuring him that the Admiral will be able to help get Emily back and restore her to the throne.

The yard at the Hound Pits is relatively deserted, the only signs of life coming from Piero's workshop. Upon entering the pub, Corvo encounters Admiral Havelock and Lord Treavor Pendleton as they discuss Corvo and their plans. Havelock asks Pendleton if he has ever killed anyone, to which the aristocrat replies, "Only with my wit."

When Corvo approaches the two, they introduce themselves and inform Corvo of their general plans, after which he may explore the area. The Admiral suggests visiting Piero Joplin, who can be found putting the finishing touches on Corvo's mask. After receiving his mask, Corvo can speak with Cecelia, who leads him upstairs to his quarters, where he has the option of falling asleep.

Corvo awakens to a slightly different version of his quarters in which the windows are dark and rain can be heard falling outside. Upon realizing that something is not right, Corvo gets out of bed and finds that the Hound Pits has vanished, and he is in a bizarre, ethereal location – the Void. He meets the Outsider, who gives Corvo his Mark and shows him how to use Blink, as well as giving him a gift – "the heart of a living thing", which can guide Corvo through his missions.

The inside of Corvo's cell.

View of the prison yard and Dunwall Tower from Corvo's cell.

The key to Corvo's cell.

The room where the safe containing the explosive is located.

The open safe with the explosive.

Section B, where Corvo's cell is located.

Corvo before performing a drop assassination on a Watch Lower Guard.

View of Coldridge from the sewer entrance. 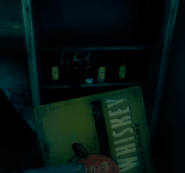 The combination to Jelly's safe hidden behind a few whiskey bottles.

Damien and Amanda, dead in the sewers.

Two guards in the sewers.

Pendleton and Havelock introduce themselves.

Loading screen for Corvo's first time in the Void.

Corvo's quarters in the Void.

The Empress, dead in the Void.

A scene in the Void depicting Emily and the Pendleton twins.

A tallboy in the Void.

The Outsider gives the Heart to Corvo.

A shrine in the Void.

Closeup of the shrine in the Void.
Add a photo to this gallery 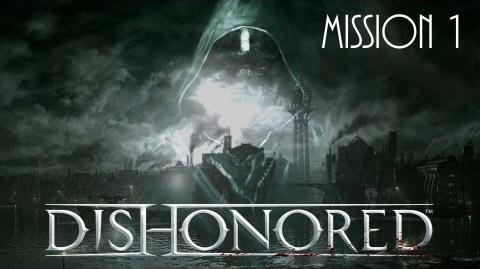 Retrieved from "https://dishonored.fandom.com/wiki/Dishonored_(Mission)?oldid=164714"
Community content is available under CC-BY-SA unless otherwise noted.