Dishonored: The Peeress and the Price

Dishonored: The Peeress and the Price is a two-issue comics series, written by Michael Moreci and illustrated by Andrea Olimpieri and Mattia Iacono, published by Titan Comics in collaboration with Bethesda Softworks. The story is set in Dunwall after the events of Dishonored 2 and revolves around Emily Kaldwin investigating a series of murders alongside Corvo Attano. She is also facing a conflict with the politician Archibald Wainwright regarding the rule of Gristol, in the wake of Delilah's bloodied coup.

"Set after Dishonored 2, our story see Emily Kaldwin return to Dunwall for an adventure with Corvano Attano!
Emily comes into conflict with a politician named Archibald Dufrane[sic], and there is a mysterious killer on the loose. But when Emily’s powers start to falter in the middle of their investigation, things start to deadly..."
—Official synopsis

A month after the end of Delilah's Coup, Empress Emily Kaldwin is busy rebuilding Dunwall and regaining her people's trust. However Archibald Wainwright, son of a former member of the Gristol Parliament, is rallying common people to dissolve the imperial monarchy in Gristol and replace it with a democratic system.

Emily attends the gathering with Corvo to win over the crowd, pointing out her efforts to bring stability back to the Isles. She ends up instead debating with Archibald about the flaws of the current political system which led to Delilah's destructive reign. Emily accuses Archibald of using the people for his own personal agenda. He denies, claiming that he is genuine about his cause. Captain Laurence ends their heated conversation and Emily leaves with Corvo, bitter. While Corvo wouldn't mind silencing Archibald for his lack of respect towards the Empress, Emily prefers to confront him with diplomacy.

The Watch Officer informs the Empress and the Royal Protector about another slaughter at one of the reconstruction sites. There, they find the rebuilding crew massacred, their bodies mutilated and dismembered, with the exception of Charles. The man, still in shock, eventually tells them that they were attacked by a group with faces like rats. Their leader, a woman, forced him to watch the brutal scene.

Emily decides to bypass her own laws to investigate the so-called Rat Gang targeting her reconstruction project. Under cover of anonymity, she goes to the Distillery District with Corvo to rough up smugglers. The pair learn that the Rat Gang deals with dark alchemy and may be hiding in the district. They eventually find Ashford, one of its member, having carefree drinks at a pub. They neutralize the hostiles and interrogate the man. He finally tells them that their boss, a woman, is targeting the Dunwall Clocktower on the same night. Emily is optimistic about ending the gang tonight, but Corvo senses a trap laid for them based on how easy they found that gang member.

Meanwhile, Archibald is kidnapped by Luella Price, the woman behind the Rat Gang. She offers Archibald to help him in his revolution if he helps her to burn Dunwall down. Luella claims that the whole rebuilt idea is unnatural and is against the natural order of the universe. Archibald refuses her offer and Price threatens him based on her reputation. She also affirms that with or without his help, her plan is already in motion.

At the Dunwall Clocktower, Corvo and Emily confront the Rat Gang. While trying to stop the fleeing gang members. Emily’s powers malfunction, causing her to fall from the tower. Luckily, She manages to regain balance and hold the ledge. Looking up, she sees that the clocktower is rigged with some kind of bonecharms and explosives. The explosives go on and the tower's top blows up while Corvo is still up there.

"Charismatic revolutionary Archibald Wainwright is stirring up unrest among the Dunwall citizens... and causing trouble for the Empress of Dunwall, Emily Kaldwin, and her father, Corvo Attano.
Emily and Corvo discover that some of the workers who have been attempting to rebuild Dunwall have been savagely attacked and slaughtered by a deadly gang wearing rat masks. This Rat Gang are led by a mysterious female assailant.
The leader of the Rat Gang is revealed to be Luella Price, who kidnaps Wainwright and reveals that she wants to take over Dunwall with his help.
Emily and Corvo are led into a trap at Dunwall Clock Tower, where Corvo is caught in a huge explosion..."
—Official synopsis

Emily rescues her father, in critical condition after the explosion, from the smoking ruins of the Dunwall Clocktower.

The next day, Archibald Wainwright is talking to a larger crowd right in the courtyard of Dunwall Tower, under the watchful eyes of the City Watch. He explains to the common folks that events such as the Rat Plague were caused by power struggles within the Gristol Parliament and the leading nobility, which Empress Kaldwin is powerless against. However, as Archibald calls for new leadership, the crowd calls for the death of the Imperial ruler. The City Watch then start dispersing them. Archibald tries to calm the situation, but Luella Price appears in the crowd to threaten him again. With Archibald muted, the crowd starts rioting against the City Watch.

Meanwhile, Emily is at Corvo's bedside, her father covered in bandages. She thinks back of her own powers and what she is afraid to lose, but also her connection through him to her people. Captain Laurence interrupts her thoughts to inform her of the riot at Dunwall Tower, attributed to Wainwright, and yet another terrorist attack, this time at the Shelter. Emily wants to deal first with the attack before the politician, despite Corvo's warning her with his remaining forces.

At the bombed Shelter, Emily finds the dead body of the man in charge of rebuilding it, an ally in her reconstruction plans for Dunwall. She also intercepts a Grand Guard evacuating the site with an explosive device. Laurence identifies the craft as the Roaring Boys Gang, who Emily sets her eyes on.

Emily finds a group of Roaring Boys moving a crate of explosives. She makes quick work of the enforcers and incapacitates their leader with her powers for interrogation. Threatened, he confesses providing explosives to the Rat Gang and gives up their hideout, an abandoned wharf at the end of the Old Waterfront.

Emily reaches the place and make uses of the powers granted to her by the Outsider's Mark to quietly neutralize the guards in front. She enters, knowing that it is a trap laid for her and her supernatural powers' newfound weakness. Luella awaits inside with five other gang members, and soon Emily's Mark starts inflicting pain upon her. Luella shows her a Bonecharm, explaining it was made by a dying scholar from the Academy of Natural Philosophy on notes about reversing Void energies. Luella laughs at Emily's powers failing her and knocks her down. As she prepares to deal the killing blow, Emily overcomes her pain and counterattacks. She kills off the guards, relying on her father's teaching and her own experience rather than her powers. Luella strikes back, claiming Dunwall will burn by her own hand or others'. Emily disarms her but leaves her alive.

The next day, Luella is brought, chained, to the Imperial court. She claims having no remorse for her deed while attempting to seize power like others before her. Emily refuses to have her executed, leaving the decision to a tribunal instead. Laurence questions her verdict, implying Corvo wouldn't allow Price to live either. Emily answers that as Empress, she cannot be the only one deciding for her people. Archibald, who attended the event, is moved by her words. He then recognises her legitimacy to the throne, before leading the assistance into cheering the Empress.

Back at the hospital, a recovering Corvo tells his daughter that she should have sent their enemies a message through Price's execution. She answers him that doing so did not prevail Havelock's treason. He eventually concludes that she needs to trust herself when facing trouble. 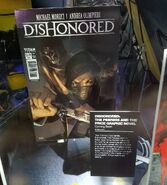 Second issue, cover B (game art variant).
Add a photo to this gallery

Issue 1, fifth page preview.
Add a photo to this gallery

Issue 2, third page preview.
Add a photo to this gallery

Retrieved from "https://dishonored.fandom.com/wiki/Dishonored:_The_Peeress_and_the_Price?oldid=164924"
Community content is available under CC-BY-SA unless otherwise noted.