Devouring Swarm is a supernatural ability in Dishonored and Dishonored 2. It allows Corvo Attano to summon forth a swarm of ravenous rats that will attack any characters in the immediate area. Devouring Swarm consumes 40% of Corvo's total mana.

With Tier I Devouring Swarm, Corvo can summon a swarm of rats which attacks and eats foes.

With Tier II Devouring Swarm, the swarm is larger, allowing its attacks to do more damage and allowing it to eat foes faster. 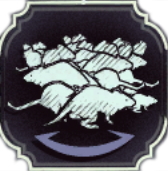 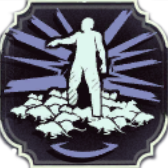 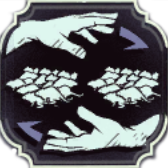 A devouring swarm of rats attacks a survivor.

The Lonely Rat Boy uses Devouring Swarm in the second chapter of The Tales from Dunwall, The Hand that Feeds.

Devouring Swarm as it appears in the second issue of Dishonored: The Wyrmwood Deceit.

Devouring Swarm being used on a Grand Guard in Dishonored 2.
Add a photo to this gallery

Retrieved from "https://dishonored.fandom.com/wiki/Devouring_Swarm?oldid=168510"
Community content is available under CC-BY-SA unless otherwise noted.