Dishonored Wiki
Register
Don't have an account?
Sign In
Advertisement
in: Spoilers, Citations needed, The Knife of Dunwall Characters,
and 8 more
English

Delilah Copperspoon, known formally as Delilah Kaldwin I during her reign as Empress, is a major character in the Dishonored franchise, appearing in the DLCs The Knife of Dunwall and The Brigmore Witches. In the latter, she is the main antagonist. The same Delilah whom the Outsider tasks Daud with investigating, she is revealed to be the leader of a powerful coven called the Brigmore Witches and is defeated by Daud while attempting to possess the body of Emily Kaldwin. Fifteen years after her defeat in The Brigmore Witches, she resurges in Dishonored 2 as the main antagonist and successfully usurps Empress Emily.

Delilah was born to the Kaldwin lineage as the illegitimate daughter of Emperor Euhorn Kaldwin. Fawning for her father's attention, she would ask Emperor Kaldwin if she could participate in court, in hopes of finally assuming the role of a proper princess, but her pleas were only met with deflection and postponement. According to Delilah, one day, while playing together, Jessamine Kaldwin accidentally broke an item of immense value and framed Delilah for its destruction when questioned. Consequently, Delilah was whipped repeatedly and thrown out of Dunwall Tower alongside her mother.

Left to struggle for survival in the unforgiving streets of Dunwall, Delilah and her mother would find themselves in debtor's prison, where her mother would meet her slow demise at the hands of a prison guard. With her mother's death, Delilah was forced to work odd jobs while painting on the side, until eventually coming under the tutelage of Anton Sokolov. Sokolov appreciated her ways of imagining the world as a better place through her art; however, her interest in the occult and her obsession with the Kaldwins took her out of his circles. She was eventually gifted with the Outsider's Mark in 1831.

A year later and as the Rat Plague started, Delilah founded her coven of witches with Breanna Ashworth, an aristocrat she saved from an arranged life. She shared her powers with her admirers, and they lived carefree, roaming graveyards and the countryside. Another year later, she moved her coven to the dilapidated and secluded Brigmore Manor, from which she started her plans to take over the Empire.

Delilah met Luca Abele when he was a boy and left him enamored with her. The details of that encounter are however not known.[4]

Delilah is the subject of Daud's investigation in The Knife of Dunwall, which leads him to uncover her influence on Timsh and associated happenings. The assassin is briefly able to speak with Delilah through a statue in the Timsh Estate – during the conversation, Delilah expresses animosity toward Daud and claims she should kill him, but chooses not to "for the sake of [her] sisters". Instead, she threatens him with unknown peril should he continue his investigations, and warns, "There are great changes coming, and I'll expect you not to interfere", but doesn't care about what Daud does to Timsh.

"Hear me, all of you. Your rightful Empress has returned!"
—Delilah, to the Dunwall elite

Delilah's endgame is not to simply rule over Dunwall, but to use her newfound powers to reshape reality to her liking. She plans to compose a painting capable of doing so, and is either trapped for eternity within her own reality or killed outright by Emily or Corvo. If eliminated non-lethally, her painting ends up hung above the throne.

Having seen and survived the worst the world could deal out, Delilah becomes jaded by and dissatisfied with reality, with her primary goal becoming the induction of change. In order to climb from a point of neglect and filth, Delilah does whatever necessary to survive and ascend to the top. Using her uncanny allure and cunning to attract and manipulate those around her, she is able to rise to heights unimaginable by most. In both of her major power plays, she seeks ultimately the alteration of reality in her image, motivated by her dismal upbringing and vindication against the world. She feels entitled to this right of warping reality, thinking it to be her brand of "justice" and form of correcting the world's many flaws. It is left ambiguous whether her remembrances of the past reflect reality or whether the truth has been warped by her lies and/or insanity. 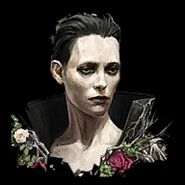 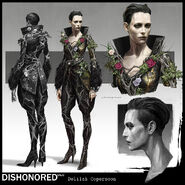 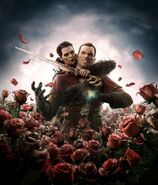 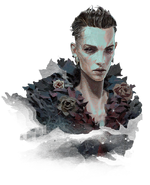 Delilah in the Void. 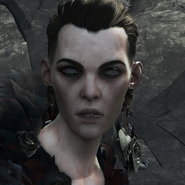 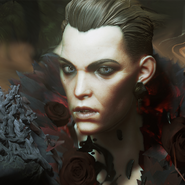