Dishonored Wiki
Register
Don't have an account?
Sign In
Advertisement
in: Spoilers, The Brigmore Witches, Gangs,
and 3 more
English 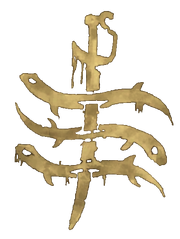 "Your friend Edgar Wakefield set me up to be taken by the City Watch, and you followed him [...] But you know what? I forgive you [...] I'm FILLED with love. But the following people each owe me a finger. Logan, Douglas, Bang-Bang, Ferris, Pigface, the Bakers, and Annabelle [...] TWO from you, Annabelle. Have a good night!"
—Lizzy Stride to the Dead Eels

The Dead Eels Gang is a criminal faction in Dunwall located in Drapers Ward, known primarily for piracy along the Wrenhaven River. They appear in the final Dishonored DLC, The Brigmore Witches, to assist Daud in his efforts to find and confront Delilah Copperspoon. The Eels are rivals to the Hatters, another faction situated in Drapers Ward, and they fight using gaff hooks and bottles of river krust acid.

Based in the Riverfront docks, the Dead Eels have possession of a cargo ship called the Undine, which they use for smuggling and piracy on the Wrenhaven River; the Undine is considered infamous along the Wrenhaven, as the ship is allowed past corrupt harbor masters and River patrol officers. In a recent attack, the ship's engine coil was stolen by the Hatters, leaving the ship incapacitated. This setback creates further tension within the group, leading some to believe that they were better off with Lizzy as their leader.

Sometime prior to the events of The Brigmore Witches, the Eels' leader, Lizzy Stride, was intentionally set-up by her second-in-command, Edgar Wakefield, who organized her subsequent capture and imprisonment by the City Watch. With Lizzy gone and the Eels in a fierce rivalry with the Hatters over Drapers Ward, the group began to unravel as Wakefield, newly-appointed leader, used extreme methods to rid the gang of Lizzy's loyalists and struggled to prove his leadership abilities to the rest of the Eels. The Eels were also worried that Wakefield was weakening their businesses opportunities, as he did not keep his word after making deals. The ship's engine coil was also stolen under his leadership, further adding discontent among the Dead Eels. In a report, a Hatter spy noted that, "things are likely to fly apart before long."

In The Brigmore Witches, Daud must free Lizzy Stride from Coldridge Prison and help her reclaim control over the Dead Eels so that he can use her ship to travel to Brigmore Manor.

The Dead Eels also make a brief appearance in Dishonored: The Wyrmwood Deceit, where a number of them guard an old whaling trawler hulk near the ocean, attacking Corvo Attano when he attempts to board it.

The Dead Eels attack a few Hatters with gas.

A male member of the Dead Eels.

Dead Eels in a cloud of their own green gas.

The Dead Eels listen to Lizzy give her speech.

The Dead Eels stand on the deck of the Undine.

A female member of the Dead Eels.

A member of the Dead Eels gang. 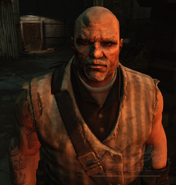 Maggot Montaine, a member of the Dead Eels gang.

The Dead Eels confront a Hatter.

Close up of Annabelle's tattoo.

The Dead Eels gang symbol as a tattoo. 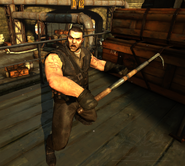 A gaff hook dropped by a Dead Eel. 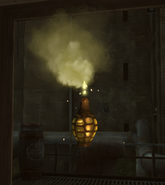 A bottle of River Krust Acid utilized by the Dead Eels.

Promotional art of a member of the Dead Eels.