Dead Counters are members of the Dunwall City Watch responsible for dealing with plague victims, both dead and alive.

This position was commissioned by the Lord Regent Hiram Burrows and started during the Month of Rain, 1837. It is open to City Watch Officers for increased pay which, at ten coins per day, is one and one half the normal salary for Officers.[1] They also receive extra elixir to protect them from catching the plague. Officers must take a test when applying, and if they are selected, they receive two weeks paid training. The Dead Counter has command over the other members of the City Watch in any situation dealing with the plague, but in other matters they must report to a commanding Officer.[2]

There are indications that even though the Dead Counter's salary is high, the position is not popular, due to the obligation of dealing with weepers. During the mission Eminent Domain in The Knife of Dunwall, an Officer can be heard talking to a Watch Lower Guard named Simmons about how much better the job of evicting healthy people is compared to working in weeper dens. Simmons expresses guilt for his actions, but the Officer claims he should be thankful for the job he has.

Dead Counters are also responsible for seizing the property of those afflicted by the plague, due to a new law stating that all possessions of plague victims "immediately [become] property of the state."[3] However, there is ample evidence to suggest that the Dead Counters are corrupt. In his journal, a Butcher notes that, "There are bribes that must be paid to [...] Barrister Arnold Timsh's Dead Counters."

Even though Dead Counters are rarely encountered in Dishonored, posters advertising the position can be found throughout Dunwall.

Images of Dead Counters from Dishonored: The Dunwall Archives.

A painting depicting a Dead Counter, found in Dishonored: The Dunwall Archives.

A Dead Counter with a clipboard.

A Dead Counter chases after Corvo. 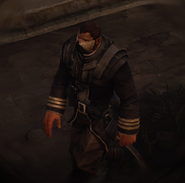 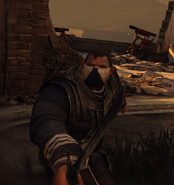 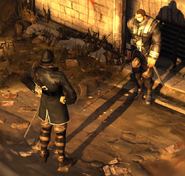 A Dead Counter conversing with an Officer. 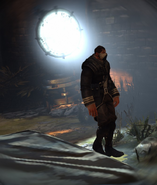 Dead Counter in the spotlight.

A Dead Counter being stabbed.

A Dead Counter in the background as two guards dump corpses.

A Dead Counter in the Dishonored debut trailer.
Add a photo to this gallery

Retrieved from "https://dishonored.fandom.com/wiki/Dead_Counters?oldid=145160"
Community content is available under CC-BY-SA unless otherwise noted.