"Preaching to the choir there, Sly Harold..."
—Rodney, in reply to Sly Harold.

Dapper Rodney is a member of the Roaring Boys Gang introduced in the first issue of the Dishonored: The Wyrmwood Deceit.

He is a close friend and partner of Sly Harold, and like his partner, he is of a philosophical bent, often discussing criminal actions and the illegal activities of dishonest city officials.

Rodney is of some importance in the Roaring Boys and seems to be the de facto leader of the gang members with him, often ordering them about.

On an evening, Rodney is out at the Old Port District with Harold and the Roaring Boys, supervising the unloading of a contraband shipment.

He helps defend the dock area when Corvo Attano and members of the City Watch interfere with the operations of his gang, and is the one who urges Sly Harold to summon the Big Lad.

Rodney and Sly Harold of the Roaring Boys.

Corvo sneaks up on Rodney and Sly Harold. 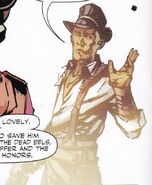 Rodney ordering the Roaring Boys to attack Corvo.
Add a photo to this gallery

Retrieved from "https://dishonored.fandom.com/wiki/Dapper_Rodney?oldid=139310"
Community content is available under CC-BY-SA unless otherwise noted.