The city receives the bulk of the visitors to Serkonos[1] and is a popular holiday location, as it has an abundance of sun in the warmer months.[2] It is best known for its quality cigars. Cullero Cigars, a popular brand of cigars sold in Dunwall, originate here. Cullero also produces grapes.[3]

Cullero was once a bog in the distant past. However, the Cullero Gap protected the area from the vagaries of the weather as well as the greatest plague of the eastern seas: pirates. Early traders set up outposts, eventually building piers to meet the ships far from shore. The seas often turned, eviscerating the boards and washing away the settlement, leaving the people to rebuild them over and over again. With time, Cullero became known for its military prowess. The Culleros earned a mean reputation on the seas, as mercantile bullies and smugglers, and many believed that they were not victims of piracy, but perpetrators of it. They traded heavily for iron, using it to shovel fill into the swamps and build a proper harbor.

Eventually, they decided not to rely on trade alone, and gathered their allies and sailed to Karnaca. There they lay siege, hoping for access to its iron resources, but unbeknownst to them, spies managed to slip through the blockades and appeal to the Lady of Saggunto, Ximena, for aid. However, when she tried to pursue, she found the guerrilla war to be too costly, and eventually, once the civilization in Saggunto collapsed, Karnaca and Cullero were left to fend for themselves, with neither city gaining in prominence at that time.

In the centuries that followed, as Gristol grew in power, deserting Gristolian sailors take up residence in Cullero, bringing in new military tactics and innovations. The town took on a military character, policed by the Stewards of Cullero and led by a Chief. Unfortunately, this led to Cullero bearing the brunt of the War of Four Crowns. The Culleros welcomed the Duke and Duchess's coup in Karnaca that brought Serkonos into the fold of the Empire of the Isles, which saved countless Culleran lives. [4] 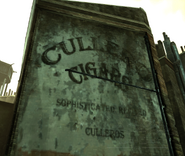 An advertisement for Cullero Cigars. 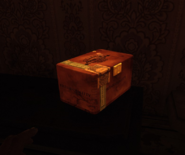 A box of Cullero Cigars.