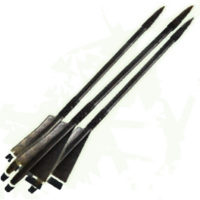 Crossbow bolts are the standard type of crossbow ammunition, and the first and most basic accessory that Corvo Attano and Emily Kaldwin receives for the weapon. They are also called wristbow bolts when used for Daud's wristbow, or voltaic shots when used for Billie Lurk's voltaic gun. Though the bolts will often break after use, they can sometimes be retrieved from corpses. If an enemy is unaware, a bolt to the head will kill them instantly. Though they do not do as much damage in a fight as the standard ammunition of the average pistol, they are much more accurate, have better range, and are also much quieter.

Icon for the Crossbow and Wristbow bolts.

A crossbow bolt in mid air. 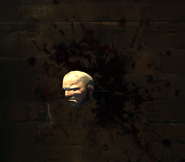 A crossbow bolt on a wall, along with a dismembered head.

A harden bolt in Dishonored 2.
Add a photo to this gallery

Retrieved from "https://dishonored.fandom.com/wiki/Crossbow_Bolts?oldid=164208"
Community content is available under CC-BY-SA unless otherwise noted.