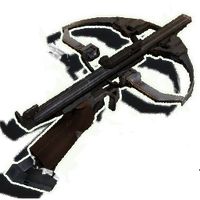 A silent, exotic weapon crafted from the finest materials, the crossbow is a good choice for the silent assassin. First acquired in the Dunwall Sewer stash after the Coldridge Prison break-out, it quickly becomes one of Corvo Attano's main weapons. In Dishonored 2, the crossbow is a gift from Anton Sokolov, found aboard the Dreadful Wale before the mission Edge of the World.

It can carry basic crossbow bolts, incendiary bolts, and sleep darts - the only ranged non-lethal attack. Corvo can carry 10 of each different type of bolt, without any upgrades. The weapon can also be upgraded to improve accuracy, range, and reload speed, as well as Corvo's bolt capacity for the crossbow. It should be noted that the bolt capacity upgrade only counts for regular bolts, not sleep darts or incendiary bolts. By 1852, howling bolts and stinging bolts have been invented, and the crossbow can launch these too.

It works particularly well when used in conjunction with the zoom function in Corvo's mask or Emily Kaldwin's spyglass, allowing for long-range kills and knockouts. However, it should be noted that an attempted headshot on Overseers from the front will cause the bolt to bounce off of their mask, and alert the intended victim to the protagonist's presence. Enemies wearing helmets also have limited protection from incoming bolts of any kind. The crossbow can also be very useful when trying to dispatch two enemies facing each other without setting off the alarm, or without using mana for Bend Time. If the protagonist is directly above or behind the two targets, they can quickly shoot one and assassinate/choke the other to avoid detection. Additionally, with the Reinforced Bolts bone charm, the regular bolt can also be retrieved much more frequently.

With this upgrade, the projectile's deviation from a consistent, reticle-aligned path is greatly reduced, improving precision and accuracy and preventing shots from straying from their target. Visually, this upgrade takes the form of two mechanical weights, attached to the top of the Crossbow's front left arm and the bottom of the front right.

The Crossbow Range upgrade extends the effective range of projectiles fired by the crossbow, reducing drop and allowing for accurate hit placement at much greater distances. This upgrade is represented by the addition of two wheels between the bolt track and the front arms, and two metal rods connecting the bases of the front and back arms on either side.

This upgrade vastly reduces the time required for a new bolt or projectile to be loaded by the crossbow, allowing for shots to be fired in far quicker succession than before and for different projectile types to be loaded very swiftly. With this upgrade, the crossbow receives a metal cogwheel with small teeth on its inner circumference, around the base of the bolt track. When reloading a shot, the track and arm assembly are rotated 180 degrees around the wheel.

Each pair of crossbow Masterwork upgrades are mutually exclusive, as well as unique to that character.

Even with the increased reload speed of the crossbow once the Reload Speed upgrade is purchased, Coffin Nails takes it far and above, giving Corvo semi-automatic firing of bolts and other projectiles at a very high rate, useful for barraging enemies with a fast flurry of bolts. However, it also consumes ammunition at an equally high rate. Visually, Corvo's crossbow receives an acceleration mechanism attached at the rear of the bolt track.

Corvo's crossbow, when equipped with The Dealer, gains a spectrum of immensely useful functions. An aim-lock gives the crossbow perfect accuracy on three marked targets at close to medium ranges, with the capability to even specify which part of each target's body will be hit. The shot, meanwhile, only consumes a single bolt, effectively tripling one's ammunition capacity. Visually, Corvo's crossbow receives a small metal blade right in front of the bolt track. When two targets are marked, the blade extends in front of the bolt itself, and when three targets are marked, it splits into a Y shape.

With Piercing Insult, Emily's crossbow can be charged to pierce through enemies and hit targets behind them, allowing Emily to kill or severely damage multiple enemies in a single shot, potentially conserving ammunition and dispensing with hostiles faster. The charged bolts can pierce Overseer’s mask from the front and can also sever clockwork soldiers' heads and arms clean off even with their armor platings. Along with increased overall damage as well, the crossbow's lethality is further improved with this upgrade. Visually, Emily's crossbow receives a set of extra mechanisms bulking up the Extended Bolt Range wheels. When charging, the wheels can be seen rotating and vibrating, to the point of becoming red hot.

Emily's crossbow becomes perfectly accurate at all ranges with Long Distance Lover, experiencing no drop and no deviation from the reticle. This makes hitting even small targets at a distance a trifle, allowing for stealthy precision at very long ranges. When using her spyglass with the upgraded crossbow equipped, Emily sees through a special high-powered scope as well. Visually, Emily's crossbow receives a pair of small telescopic sights made from glass lenses, on the top and bottom of the Reload Speed geared wheel.

Concept art of the crossbow.

Crossbow without any bolts. 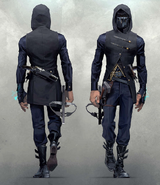 Corvo's crossbow hanging from his belt.

The crossbow when first received in Dishonored.

View of the crossbow when first received in Dishonored 2.

Corvo using the crossbow in the Dishonored debut trailer.