"Everything’s fine. I run the still like I run a game of Nancy."
—Craxton to another member of the Bottle Street Gang

Craxton is a minor character and thug who appears in Dishonored during the mission High Overseer Campbell.

Craxton seems to be a relatively important member within the Bottle Street Gang and is often given special duties by Slackjaw himself.

During the time when Corvo Attano is seeking to remove Thaddeus Campbell from power, Craxton is put in charge of not only the Distillery, but the still that produces the bootleg version of Sokolov's Elixir.

He can be found in the yard outside of the Distillery playing a game of Nancy against one of his fellow gang-members.

He is also responsible for providing the bootleg elixir to Madame Prudence and her courtesans at the Golden Cat bathhouse and dropped off their delivery right before the time of the mission House of Pleasure.

Shortly before the events of The Knife of Dunwall, Craxton had managed to gain the enmity of the Hatters Gang, in particular the group that occupies the Black Friar during the mission Eminent Domain. Such is the Hatters' dislike for Craxton that "getting even" with him has been put on a to-do list by the rival criminals.

A face render of the model that was used for Craxton.

A close up of Craxton. 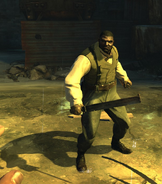 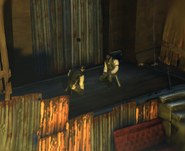 Craxton and a fellow thug playing a game of Nancy. 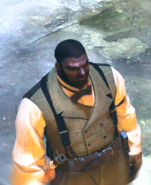 Craxton seen from above.

Craxton throwing a bottle at Corvo. 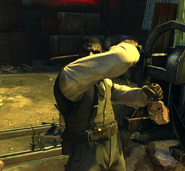 Craxton trying to hit Corvo with his cleaver.