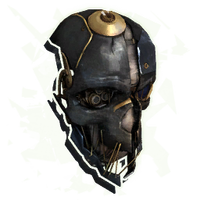 Corvo Attano's mask is a device used to conceal his identity, and is constructed of a sturdy material that allows it to serve as conventional armor. Accompanying this, the mask possesses a telescopic function, which enhances Corvo's focus when used.

The mask was created by the inventor Piero Joplin, who gives it to Corvo upon their first meeting. He can also upgrade it later with a spyglass zoom after Corvo delivers the appropriate blueprints.

The mask immediately becomes the terror of Dunwall, with many a guest at "Lady Boyle's Last Party" commenting on how frightening the mask looks, along with how it reminds them of the masked man that has been terrorizing the aristocracy of the city.

An animated view of Corvo's mask.

A rendered image of Corvo's mask.

Corvo's view with the mask optics upgrade.
Add a photo to this gallery

Retrieved from "https://dishonored.fandom.com/wiki/Corvo%27s_Mask?oldid=20366"
Community content is available under CC-BY-SA unless otherwise noted.