"Burglary, spying, picking pockets... Daud taught me more than just killing. It can keep me afloat, for now."
—Billie Lurk upon receiving her first contracts

If the actions necessary to finish a contract have been completed but Billie has not accepted the contract, she will not get a reward. However, if the contract is accepted after already having been finished, she will be rewarded as normal.

Contracts in this mission are found on Billie's desk in her quarters in the Dreadful Wale.

Description: "An Eyeless hag stole my poor Milky. He's white as whalebone but riddled with disease. It breaks my old heart to ask this of you, but if you find my Milky, please put him out of his misery and burn his remains. Save him from those cursed Eyeless, and save Karnaca from another plague!"

Milky can be found with two other wolfhounds in the cage at the back of the second level of the Albarca Baths. All three wolfhounds can be killed through a vent in the roof accessed from a nearby room, though getting Milky out is a challenge as Jeanette Lee will close the door to the kennels if she is conscious when it is opened, and will then flee and alert the rest of the Eyeless. Once Milky has been retrieved, the long storage room just off the kennel room has a boiler at the far end. The contract is completed once his body is destroyed. You can also throw a bottle of flammable liquor at the body of Milky to complete the contract.

Description: "Those thugs at the Albarca make potions and bonecharms upstairs. Their liquor is vile, but it sells for good coin and we're losing punters to them by the day. Bring us the rat liquor recipe before our brewery goes out of business, and make sure to destroy their stock while you're at it!"

This contract is fully located in the bar room of the Albarca Baths. The recipe is in one of the locked drawers in this room, with the key located on the belt of the bartender. The plagued spirit bottles stacked on and around the crate behind the bar must be destroyed to complete this contract.

Contracts in this mission are found on the board in the black market shop.

Description: "The bartender at the Spector Club is a lying, heartless snake and needs to be taught a lesson. I'm going to bury him in my garden with the sunflowers, let him think about his mistake for a day or two. If you want to make some easy money, stash him in the crate I left on the rooftops near the Red Camellia."

The bartender can be found in the bar on the first floor of the Spector Club. The room he is in is full of Eyeless, with no easy way to separate him without the others noticing. Probably the easiest way for Billie to safely get out of there is to stand on the cabinet in the middle of the bar and attach a non-lethal hook mine to the roof. It will pull the bartender up and knock him out, at which point Billie can grab him and use Displace to make a hasty escape out the front door. His body must be placed into the blue crate by the base of the windmill on top of a building near Malveros Victory Plaza. The roof can be accessed by using Displace or by climbing the stairs in the dentist building. The contract is completed once the bartender has been placed into the crate. Killing him or leaving him anywhere else will not complete the contract.

Death to the Mime

Description: "I'll split the insurance coin with whoever arrange the death of Georgie Botello, also known as "The Cyrian Mime." He performs most days on Duchess Lisandra Avenue, which is not too far from Dead Man's Bluff, an infamous suicide spot here in Upper Cyria. Be smart, make it look convincing and we have a deal."

Botello is performing to two aristocrats on Duchess Lisandra Avenue, just opposite Brozenar Taxidermy. Dead Man's Bluff is long drop formed by the canal and is located along the nearby Canal Passage. Billie must knock him unconscious, carry his body to Dead Man's Bluff and then throw him off to complete the contract. Killing Botello in any other way will fail the contract, as well as if Billie is seen killing him.

Description: "I work at Dolores Michaels' bank, and a certain "customer" is tormenting me. Threatens and blackmails me she does, nails dead bloodflies to my door when I don't pay. I've no idea who she works for, but if you follow her quietly I bet she'll lead you right to them. Kill her and her business associates to earn your stipend."

When Billie arrives at Dolores Michaels' Deposit & Loan Bank, she will find Armanda, an Eyeless and former witch, tormenting one of the clerks. After this, Armanda will return to her employer, a man sitting on a bench in front of the Spector Club. Killing these two people will complete the contract. A number of civilians, guards and workers are spread around the area, which can be an obstacle.

Description: "I was hoping to meet my brother Alberto near Malveros Victory Plaza this morning, but he was nowhere to be found! His assistant at the dental office mentioned something about a broken jaw, and exotic cocktails at the Spector Club. If you find him, please take him to my cabin alongside the canal."

Alberto can be found in the draining room on the top floor of the Spector Club, hooked up to the sanguine infusion machine. Reversing the machine will return the blood to him. Once enough blood has been returned to him, the machine will stop working and he will fall unconscious. Billie must then carry him to a small cabin on Canal Passage, owned by his brother, to complete the contract. There is a flammable bottle by the bed that can easily kill Alberto if he is not put down carefully. Removing Alberto from the room will undo the completion of the contract.

Rags to Riches to Rags

Description: "Overheard at the Spector Club: someone quite drunk, bragging loudly. "When I first came to Karnaca, I only had 315 coin to my name – and today I opened my own lockbox at the bank!" Three cocktails later, it was revealed that said lockbox is next to some journalist's and contains a precious gemstone. Get me that gem!"

Quiet as a Mouse

Description: "Meryl Jennett has an appointment with the Director of the Bank tonight. She plans to store her most precious belongings there, one of which is an infamous address book. We need you to copy down page 125 without raising suspicion – that means no getting caught, and no harming bank personnel!"

Description: "An exquisite painting by Duke Abele himself is currently locked up on a delivery boat in Upper Cyria. Such a masterpiece deserves to be cherished by someone who can fully appreciate it's [sic] worth, not bought or sold or traded away for a few lousy bonecharms. I'm offering a substantial rewards to whoever steals it for me."

The painting is found in the locked delivery boat in the canal, near where the skiff is moored. The key to the door is on the corpse of the body below the boat. The body will spawn at the bottom of the canal but it will slowly float up until it gets stuck beneath the boat. It may also be found wedged between the boat and the wall, making it difficult to find or to detect with Foresight. Entering the boat and taking the painting inside will complete the contract.

Description: "Quick errand for the talented pickpocket. There's an Elite Guard stationed on Cadmus Abele plaza here in Upper Cyria. He has a note attached to his belt that he's planning to deliver tonight. Do me a favor and steal the note without him or anyone else noticing. If they catch you, you ain't getting paid!"

Álvaro and the Abbey

Description: "I have good reason to believe that the Abbey of the Everyman is committing unspeakable crimes within the Royal Conservatory. If you're as fond of them as I am, kill every last Blind Sister and Overseer except for Brother Cardoza. Leave him in one of his "musical chairs" and I'll deal with him myself."

Description: "Sister Rosewyn keeps a detailed record of her prophetic visions. Rumor has it she knows every secret in the Isles: murder, treason, love affairs... That kind of information could turn me into a very powerful lady. I'll give all my bonecharms to whoever manages to infiltrate the Royal Conservatory and steal that book."

Description: "I abandoned my apartment last night because of the Abbey's wretched quarantine. in my haste I left a precious relic behind, but I doubt anyone has seized it, considering how well-protected it is. In fact, I'm offering good coin to anyone who is clever enough to bypass the defenses and live to tell the tale!" 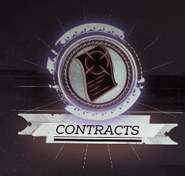 The contracts symbol in the journal. 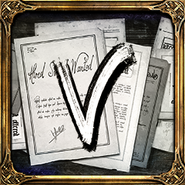 The icon for the achievement Mercenary Work.
Add a photo to this gallery
Retrieved from "https://dishonored.fandom.com/wiki/Contracts?oldid=157331"
Community content is available under CC-BY-SA unless otherwise noted.