In Dishonored, Corvo Attano must escape Coldridge after being unjustly imprisoned for the assassination of Empress Jessamine Kaldwin by Hiram Burrows, her usurper. In The Brigmore Witches, Daud must infiltrate the prison to release Lizzy Stride, the leader of the Dead Eels gang, from custody.

The prison is connected to Dunwall Tower by a bridge, leading to the prison's main gate. Coldridge has the security feature of two automated gates, controlled by levers in two different rooms. A single door leads out to the execution yard, which is fortified by guarded walkways and fences. Beyond the control area is the prison yard, and in addition there are four cell blocks, A-D. A, C, and D are located to the right of the main yard, and cell block B is to the left. Each cell block consists of three levels with a guard booth and a lockable stairway between cell blocks C and D. An interrogation room sits in the back of the building. There is also a separated section called the heretic cells which is not known to most people. Here those who are accused of practising black magic and heretical rituals are incarcerated, if they survived the Overseers' interrogation.[1]

Thanks to Sokolov technology, the prison has security features, including alarms, loudspeakers, and later on, an arc pylon. Should an alarm sound, the doors to the cell blocks will all close and lock. Individual cell doors are controlled by a machine in the cell control room, which is located off the walkway and above the yard.

Accessible to Corvo is cell block B (where Corvo is held at the beginning of the first mission along with three Bottle Street gang members), the interrogation room, stocks (which can be viewed through Corvo's cell window, but not visited) and the drawbridge connecting Coldridge to Dunwall Tower.

In The Brigmore Witches, security has been tightened following Corvo's escape, but the outer door still is not fixed. The section in which Corvo was held, cell block B, is blocked off and dark, but some new locations can be found, such as cell blocks A, C, and D. In addition, Daud will have now access to the stocks and execution yard.

Hatters, civilians, and an aristocrat are added as prisoners, and an Overseer music box plays over the speakers outside the building. The interrogation room is also drastically changed due to the interrogation of Melina, a Brigmore witch.

During A Long Day in Dunwall, the first mission of Dishonored 2, Coldridge can be glimpsed from the roofs after exiting the Tower. In the final mission, Death to the Empress, the prison is visible from the Tower grounds and Coldridge canal, but is inaccessible due to the bridge having been destroyed.

Concept art of the prison exterior.

An image of the interior of Coldridge Prison.

The broken door at Coldridge Prison. 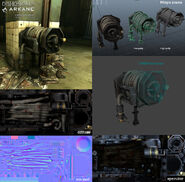 Render and texture of a hose found in the prison.

The bridge leading to Coldridge Prison.

The bridge and the prison.

View of the bridge from up high.

The execution yard on the morning of Corvo's escape.

Another angle of the prison yard.

The exterior of Coldridge Prison after the gate has been destroyed.

Coldridge at night from afar.

View of Coldridge from the dry side of the dam.

The execution yard during the day.

The execution yard at night.

An Officer executes guards in the execution yard.

A crate in Coldridge Prison with seized items.

Coldridge Prison as seen in Dishonored 2.

The inside of cell B3.

Graffiti inside of cell B1

Cell Block B from above.

The door leading to the interrogation room.

Implements used on the prisoners.

Hackworth and another Lower Watch Guards conversing in the prison yard.

Security door and bulletin board.

Guards talking outside the cell blocks.

Section B closed after Corvo's escape.

The yard as it appears in The Brigmore Witches.

The prison yard from up high. 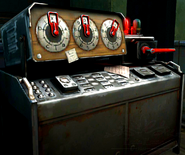 Area between the yard and the interrogation room.

A prisoner in a cell.