Coaches are a type of vehicle used around the Empire of the Isles, including in Dunwall and Karnaca. Like rail cars, they are a form of ground transportation, but they do not use rails, making them ideal for traveling through older parts of the city. They travel on four wheels; the back pair are significantly larger than the front.

Coaches commonly feature one door on each side and three narrow vented windows. A box seat is attached externally to the front of the vehicle, which is used by the coachman, while a footboard can be spotted at the back.

While coaches feature electric lights, no power source can be located on the coach. While no moving coaches can be found in the game, concept art depicts the coach being driven by two horses, making it very similar to real world horse-drawn coaches and carriages.

Very few coaches are seen in Dunwall, but one can be spotted at Dunwall Tower by the main entrance.

View of the front.

Other side of the coach. 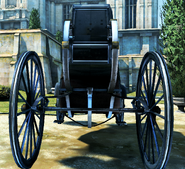 View of the back.

A coach in the Void. 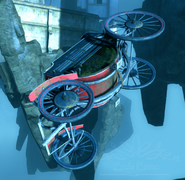 A coach floating in the Void.

Another coach in the Void.