Cienfuegos Pharmacy is a pharmacy business located on Raqueza Avenue in Upper Cyria. Previously owned by Eleuterio Cienfuegos, it was claimed by Dolores Michaels Deposit & Loan Bank on the occasion of his death shortly before Death of the Outsider.

Cienfuegos Pharmacy was opened by the Cienfuegos family some time before 1802, and was a respected business.[1] When Eleuterio Cienfuegos was murdered, Dolores Michael's bank foreclosed on the estate to satisfy debts allegedly owed by Cienfuegos to the bank. Not all believed this to be just, and a petition went around to try and reverse this and return the property to its rightful owners. Regardless, the medicines, paintings, and the complete inventory of Cienfuegos Pharmacy were sold at an auction in Colibron Plaza.[2]

Only the front of the shop can be seen during Death of the Outsider as the rest has been sealed up by the bank. However, Cienfeugos's private residence, located above the pharmacy, has not yet been emptied and contains some coin and other items. Access is by the open window. 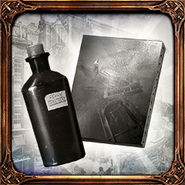 The icon for the achievement Big-time Player.
Add a photo to this gallery

Retrieved from "https://dishonored.fandom.com/wiki/Cienfuegos_Pharmacy?oldid=156125"
Community content is available under CC-BY-SA unless otherwise noted.