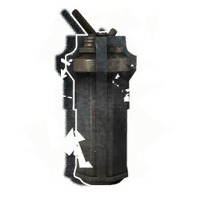 Chokedust is a weapon accessible to Daud in The Knife of Dunwall and in The Brigmore Witches DLC. Filled with unrefined whale oil, it works by stunning enemies when thrown, hampering their breathing and allowing for a quick escape. Chokedust also has the useful property of not alerting any enemies who happen to see its deployment, even if they are not in its area of effect.

Chokedust has been in common use by the guards in Coldridge Prison to subdue prisoners. A note reveals that the new Baffle Dust formula had been tested in the prison as well.

Daud can throw the dust at one or several targets that are in close proximity to one another and stun them. Coupling this with the Blink power allows Daud to close in for a group kill or to subdue the targets with considerable ease.

Chokedust can be used for stealth as well. Similar to a bottle when thrown, this dust can distract enemies. Daud can simply toss it at a target or in another direction to alter the movement patterns of opponents by attracting their attention.

It can also be used to kill groups of rats, apparently from the explosive force behind deploying the gas. This force does not damage anything else.

Upon discovering the blueprints in Coldridge Prison during The Brigmore Witches, Daud will be able to purchase Baffle Dust. It possess the same effects as chokedust, with the added bonus that enemies doused in the dust will not be in a state of heightened awareness after it wears off. It can also be utilized as a sort of "amnesia dust", as using it on enemies after being detected will put them in a temporary state of forgetfulness, and Daud will be able to continue on his way as though he were never seen. Note that this will not affect the achievement Silence Is Golden, as Daud could still have been detected before. 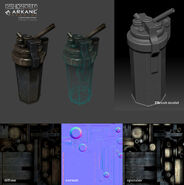 Close up of a cannister of chokedust.

Daud using chokedust on a group of Butchers.

Daud throwing chokedust at a pair of guards.

The guards recovering from the effects of chokedust.
Add a photo to this gallery

Retrieved from "https://dishonored.fandom.com/wiki/Chokedust?oldid=148717"
Community content is available under CC-BY-SA unless otherwise noted.