"Royal Protector! Such an honor! The Empress is well, I trust?"
—Ludd to Corvo.

Charlington Ludd is a minor character introduced in the second issue of the Dishonored: The Wyrmwood Deceit.

Ludd is a merchant prince whose trade includes spices, exotic goods, and other high-cost items. He was also involved in the peddling of human flesh, though this is less well-known, before Broken Tom took over this specific trading interest. His dealings have garnered him considerable wealth, the ability to hire bureaucrats and barristers to look out for his interests, and even a large private estate, Ludd Mansion. He has also accumulated some knowledge of the criminal underworld.

During the events of the Wyrmwood Deceit, Corvo Attano asks Ludd for help in locating a person vital to his investigations, but his request is brushed aside by the merchant's legal aide. Later that night, Corvo pays Ludd a visit as the Masked Felon to gather further information through less "official" channels. 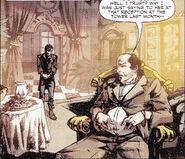 Ludd greets Corvo at his residence.

Corvo questions Ludd as the Masked Felon.
Add a photo to this gallery

Retrieved from "https://dishonored.fandom.com/wiki/Charlington_Ludd?oldid=139308"
Community content is available under CC-BY-SA unless otherwise noted.