"Why doesn't anybody listen to me? I feel like a ghost."
—Cecelia

Cecelia is a servant at the Hound Pits Pub, who is first encountered when Corvo Attano arrives at the Loyalist hideout.

Before the plague outbreak, Cecelia lived in an apartment in the Flooded District, later becoming a servant at the Hound Pits Pub. To the other servants, she is seen as incompetent, Lydia Brooklaine noting that she is only fit to do simple jobs, and Wallace Higgins chastising her for not knowing how to curtsy properly, despite the fact that she has never before worked for the aristocracy. Cecelia herself says that she does the "dirty work", reasoning that "someone has to do it".

She has seen some of the violence that the plague has brought to Dunwall, telling Corvo that some of her sister's teeth were knocked out by the City Watch. She rarely mentions her family, but she does reveal that her mother worked for the Boyles. Cecelia's comments usually center around her work at the Hound Pits and how small and insignificant she feels. She is also very pessimistic, thinking that the plague will go on forever, and saying that she might get a new home if the plague kills enough folk. However over time, seeing Corvo's fearless actions, she becomes more confident and optimistic.

During her employment at the Hound Pits Pub, she developed a connection to the place, and she expresses her desire to someday become the owner and manager of the establishment.

Cecelia works as a servant at the Hound Pits Pub, cleaning the beds and plates and setting out food for the Loyalist members. She spends her time sweeping the floors and making the beds, occasionally complaining about the dust and her fatigue, saying that there is always more work to do.

Cecelia is portrayed as an insignificant character in terms of her importance to the Conspiracy, and though she always helps out around the pub, she is rarely acknowledged by the other Loyalists. She tells Corvo that she knows that she will be the first to go, should the Loyalists have to get rid of anyone. Later, she wonders if the only reason she was spared during Farley Havelock, Teague Martin, and Treavor Pendleton's purge is because they simply forgot she existed.

During Corvo's stay at the pub, she seems to become bolder and more confident. She is amazed by Corvo's courage, commenting on it after he emerges from the sewers underneath the Hound Pits. In addition, before escaping the Hound Pits during The Loyalists, she leaves a note for Corvo, saying he gave her the courage to make a bid for freedom.

Cecelia in the abandoned apartment.

A closeup of Cecelia's face. 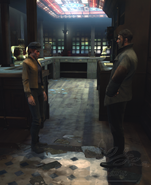 Cecelia is scolded by Wallace. 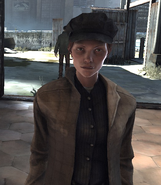 Cecelia tells Corvo that nobody found the prank funny.

Cecelia on the street outside the Hound Pits.

Cecelia tells Corvo about the key to the abandoned apartment.

Cecelia cleans a counter in the pub.

Cecelia locked in the secret apartment.

Callista and Cecelia together in the low chaos ending if Geoff Curnow dies.