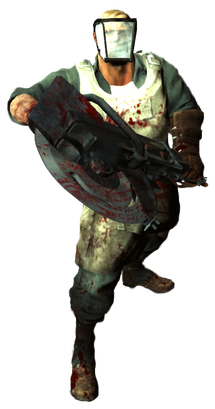 Butchers are an enemy featured in the Dishonored DLC The Knife of Dunwall. They are encountered in Slaughterhouse Row in A Captain of Industry and sometimes in the Legal District Waterfront in Eminent Domain.

Butchers come in two variants: those who wield a gang cleaver - similar to the type used by the Bottle Street gang - and those equipped with buzz-saws powered by whale oil. The latter have whale oil tanks strapped to their backs, in a manner similar to tallboys. They serve as slaughterhouse workers, cutting up whales for their oil, and holding rank over the laborers in the Rothwild Slaughterhouse. This status is often achieved through prior connections to Bundry Rothwild himself - most of the men hired as Butchers served on whaling vessels with Rothwild in his youth.

Unconcerned for the safety of others and willing to put their buzz-saws to malicious use, Butchers are highly skilled opponents who can cause high damage in close and ranged combat, using a function of their buzz-saws to shoot metal particles at their target. Outside their work, they act as enforcement for Rothwild, keeping gangs like the Hatters away from the district.

A Butcher kicking a laborer.

Daud fights a Butcher on the streets.

A Butcher by the docks.

A Butcher with a buzz-saw.

A Butcher cutting a whale carcass.

A Butcher killing a worker with a buzz-saw.

A Butcher attacks Daud with a buzz-saw.

Daud slashes a Butcher with his sword at the Rothwild Slaughterhouse.

Closeup of a masked Butcher's face. 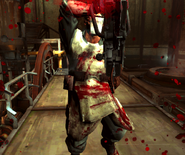 A Butcher attacks Daud with his buzz-saw.

A Butcher cutting meat with his buzz-saw.

A Butcher finishes cutting meat with his buzz-saw. 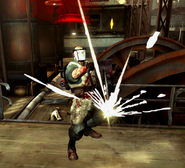 A Butcher shoots metal fragments at Daud from his buzz-saw.

Daud sneaks up on a Butcher.

Daud is attacked by Butchers underneath a dying whale.

A closeup of a Butcher with a buzz-saw.

A Butcher firing up his buzz-saw.

Butchers at the Rothwild Slaughterhouse.

A Butcher processing a whale carcass.

A Butcher, looking quite puzzled indeed.

Some Butchers being killed by an arc mine.

Daud uses chokedust on a group of Butchers.

A Butcher on a tarot card in the Dishonored Game of the Year Edition Tarot Deck.
Add a photo to this gallery

Retrieved from "https://dishonored.fandom.com/wiki/Butchers?oldid=165293"
Community content is available under CC-BY-SA unless otherwise noted.