Owner of the Rothwild Slaughterhouse

"You're about to see that my generosity is counterbalanced by a very inhumane side."
—Bundry Rothwild, talking to Abigail Ames.

Bundry Rothwild is the ruthless President and owner of the Rothwild Slaughterhouse in The Knife of Dunwall. Because of some information from the Outsider, Daud goes to Slaughterhouse Row during the mission A Captain of Industry, to question Rothwild about the whaling ship Delilah.

Early in Rothwild's life, his father – a whaler by trade – perished at sea, and his mother was killed in an industrial accident at the factory where she worked. Bundry and his younger brother were left homeless, and Bundry began frequenting the Dunwall shipyards, doing odd jobs to support himself and his brother. However, his brother was eventually abducted by the Overseers and killed after failing the Trials of Aptitude. Rothwild subsequently went to work in the whaling industry, focusing his internal rage on the precise and brutal hunting of whales, before returning to Dunwall and founding a very successful whaling business.[1]

Rothwild runs his factory with an iron fist, leaving no room for complaint or discussion of workers' rights. Even the Butchers, who "were with him in years past, when he ran a whaling crew that was notorious across the Empire"[2] discourage any talk – whether serious or in jest – of unions, strikes, or other benefits to workers.

Rothwild is acquainted with Barrister Arnold Timsh, who provided him his whaling license in his youth.[1] Timsh would later sell Rothwild the Delilah for a quarter of its market value and plot with him to sell some of the slaughterhouse's whale oil supply on the black market to circumvent the Lord Regent's tight control over oil production, which undercut profits.

Rothwild is also acquainted with Anton Sokolov, giving him access to the slaughterhouse in the hopes that the inventor will make improvements to his machinery and equipment.

At some point prior to the events of The Knife of Dunwall, Rothwild employed Abigail Ames, who rose to the rank of foreman within his factory, got the trust of her coworkers and was let in on some of his shady operations.[3] However, he soon discovers her to be a labor agitator working for his business competitor, Jack Ramsey, and threatens to have her tortured for her indiscretions.

Owner of a great number of whaling ships, Rothwild holds the Delilah as part of his fishing fleet. Daud travels to the Rothwild Slaughterhouse to determine the origin and purpose of the ship's name.

Daud first encounters Rothwild in his office, having a heated discussion with Abigail. He can obtain the information he seeks from Rothwild by putting him in an electric chair. Once he has tortured the information out of Rothwild, Daud may then choose to lock him in a live cargo crate and ship him to Samara, Tyvia, kill him on the spot, or leave him in the chair. 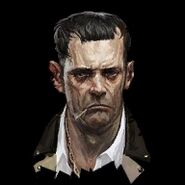 Rothwild's portrait as a target. 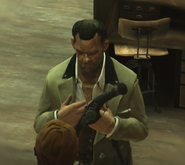 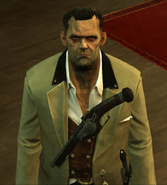 Rothwild in the interrogation chair.

Rothwild after being killed by Abigail.