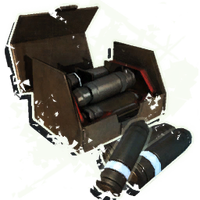 Bullets (pistol bullets in Dishonored 2) are the standard type of ammunition for the pistol. Bullets are a lethal ammunition and should not be used on enemies if attempting a non-lethal playthrough. All protagonists can initially only carry ten bullets each, but Corvo Attano, Emily Kaldwin and Billie Lurk can upgrade this amount.

They are made with a miniaturized whale oil tank capped with a metal tip. This metal tip is propelled forward by the detonation of the oil within the pistol chamber, giving it the velocity necessary to be used as a projectile weapon.

Bullets are also used as ammunition for the voltaic gun and called voltaic shots. They are propelled by electro-magnetic acceleration rather than whale oil explosion. An explosive variant can be obtained via blueprints given to Piero Joplin or black market shops.

When fired by pistols, the explosion of the whale oil within the pistol gives off a loud noise, so this must be considered when attempting to do a stealth playthrough. Shots fired by the voltaic gun are less noisy but not silent. Despite this, bullets can also prove as a distraction, through the firing of the projectiles at a solid object to lure guards towards the intended area.

Death of The Outsider 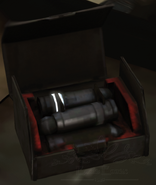 Close up of bullets flying.

A bullet before it hits Daud in The Knife of Dunwall.

A bullet flies toward Corvo.

A bullet is shot from a pistol nearby.

A bullet flies toward a Dead Eels thug.