Brozenar Taxidermy is a taxidermist business located in the Upper Cyria District. Owned by Brozenar, the basement contains a dark secret.

The entrance to Brozenar Taxidermy is on a small passageway between Duchess Lisandra Avenue and Raqueza Avenue. The walls of the main shop are covered by examples of their products. Immediately to the left of the door is the counter. Going further into the shop leads to a doorway marked as private, though Brozenar will not react to people trespassing there. Through this door is the workbench and the locked basement door.

The key to the basement is on Brozenar's belt, though a booby trap on the stairs beyond is loaded with an incendiary bolt. In the basement is where Brozenar's real work takes place: abducting people, turning them into bloodfly nests, burning the bodies and harvesting the blood amber. The blood amber is kept in a locked storage room, next to which is a small cell for keeping the next victim. When the taxidermist is ready, she moves the victims to a small room and bolts the door. She then opens the hatch between that room and the bloodfly nest, allowing the bloodflies to come through and kill the victim. After a while she retrieves the body and throws it in the incinerator, where it burns away and leaves behind a valuable lump of blood amber.

When Billie visits Upper Cyria, Brozenar is at work in the shop and a civilian is trapped in the harvesting room. Should Billie choose to free him, Brozenar will beg Billie and try to bribe her to leave her alone.

The entrance to Brozinar Taxidermy.

The main area of Brozenar Taxidermy.

Inside the main office. 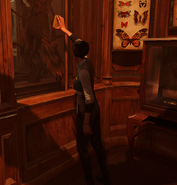 Brozenar cleaning one of the displays in her shop.

An owl that Brozenar is working on.

The cell in which Brozenar keeps her victims.

Blood amber in the storage room.

Blood amber in the boiler by the worktable.

The civilian after being saved.
Add a photo to this gallery
Retrieved from "https://dishonored.fandom.com/wiki/Brozenar_Taxidermy?oldid=160681"
Community content is available under CC-BY-SA unless otherwise noted.