"Cut me up all you want! They put ol' Broken Tom back together once, and they'll do it again!"
—Broken Tom as he is stabbed by Corvo

Broken Tom is a mysterious criminal first introduced in the second issue of Dishonored: The Wyrmwood Deceit.

Broken Tom has taken over the human flesh trade after Charlington Ludd left it to pursue more legitimate ways. Despite his rough appearance, he was purpose-built to fight and kill those who rely on the Outsider's powers. To this end, his body and suit have been enhanced with various technologies and bone charms.

Before he became the purpose-built killer, Broken Tom had to be disassembled to allow bone charms to be placed into his body. A side effect of this procedure is that he is very difficult to kill, as detached limbs can simply be reattached. He also trained with a pistol to a high level of competence, but he rarely uses it.

Broken Tom lays in wait to ambush Corvo Attano at the Berrington Ironworks, after fooling him with animals kept in cages. With enhancements both mechanical and supernatural, he is more than capable of standing up to the Royal Protector and sends him flying through a window into the Wrenhaven River.

Broken Tom joins the Roaring Boys Gang on their ship to search for Corvo, but arrives at Corvo's hiding place too late.

Using Milo Ridpath to draw Corvo into another ambush, Broken Tom again attempts to kill Corvo. This time, Corvo is more prepared to fight him, and relies only on his natural abilities, not his supernatural abilities, and eventually takes down Broken Tom.

The full extent of Broken Tom's enhancements is unknown. He has gauntlets powered by whale oil and bone charms built into his suit and flesh. His enhancements disrupt his opponent's supernatural gifts, and he is capable of leaping incredibly long distances. He also appears to not feel pain.

One of Broken Tom's enhancements is an eyepiece that, once it acquires a target, can detect where that target is, has been and will be. He uses this to great effect against Corvo, shooting at where Corvo will blink to and quickly picking up Corvo's trail after he flees. 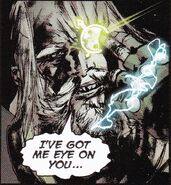 Broken Tom fires at a fleeing Corvo.
Add a photo to this gallery

Retrieved from "https://dishonored.fandom.com/wiki/Broken_Tom?oldid=143950"
Community content is available under CC-BY-SA unless otherwise noted.