"And I thought the Flooded District was run down."
—Daud

Brigmore Manor is a location outside Dunwall's walls in the Mutcherhaven District, and infamous as a lair for the city's outlaws. It is the setting of the final mission of The Brigmore Witches, Delilah's Masterwork, and featured in the second part of Dishonored: The Corroded Man, The Witchcharms.

Brigmore Manor was once the home of the Brigmore family, a rich and powerful family and the largest suppliers of timber in the Isles. Much of their fortune and influence was lost in the early 19th century, during the whale oil boom, and the manor was abandoned. Afterwards, it became, in Daud's words, a home for "two street gangs, a smuggling ring, innumerable rats, and [finally] the Brigmore Witches"." It served as the base of operations for the witch Delilah Copperspoon and her coven between 1836 and 1837, which earned them the name of Brigmore Witches.

The estate and house were bought a decade later by Slackjaw under his new identity of Azariah Fillmore, producer and importer of exotic liqueurs across the Empire. He started using his newfound fortune to employ ex-gang members and renovate Brigmore Manor. Work began on the place by 1851 and was disrupted in the Month of Darkness by the raid of the new Whalers on the manor's crypt and Delilah's old studio.[1]

In 1852, after losing their powers due to the sabotage of the Oraculum, several of the former Brigmore Witches thought about returning to Brigmore Manor.

The Brigmore Estate is located south-east below the Mutcherhaven District, north beyond the city walls of Dunwall.[2] It sits in the hollow of a hill by the Wrenhaven River, surrounded on the west side by the rest of the district sitting atop steep cliffs. A collapsed stairway used to connect the estate to Mutcherhaven. By 1837, the witches placed various enchanted statues of Delilah around the property to alert them of any unwanted intruders. Many witches and gravehounds patrol the manor and its environs, while River Krusts infest the rest of the estate.

The estate's riverside is a swamp land half-flooded by years of neglect, with a single building and several trees. A high fence gates the land from the front of the manor's grounds. A solarium, a small cemetary and a crypt are located to the west of the manor, the crypt leading to a secret entrance. The westernmost side of the house can only be entered from outside, as well as two attics leading to a large terrace on the third floor.

An overgrown garden occupies along with a large fountain, two storage sheds, a gazebo and a stream flowing down a waterfall. The manor itself is old and dilapidated, with many wooden support keeping the walls from collapsing. Inside, the floors and walls are riddled with holes leading to many treacherous drops. The only entrances to the building are the front door and the crypt.

The first floor consists of a living room, several flooded corridors, and a large gallery. It is heavily guarded by many witches and gravehounds. The entrance leading to the gallery is covered by various snares and covered by vegetation. It can only be accessed via an opening on the second floor. The room itself is lightly guarded by a few witches. The gallery is mainly occupied by a painting working as a portal to the Void.

The second floor contains a library and a few small rooms. It is guarded by several witches and a gravehound. The library can only be accessed via an opening in the west wing. One of the rooms holds a tortured Overseer while another leads to the third floor. The witches' living quarters on this floor are littered with planters for their vegetal creations.

The third floor is comprised several attics including Delilah's studio. It contains several blocks of stone for sculpting and painting materials. It is unguarded but defended by several tripwire traps. The lantern required to access the Void from Delilah's painting is located here along with her journal. 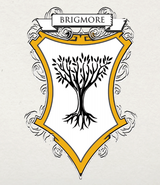 Brigmore emblem on a flag.

Trees in front of the manor.

Brigmore Manor in the distance.

A Delilah statue in the crypt.

An inundated part of the house.

A collapsed ceiling inside the manor.

A hallway in Brigmore Manor.

A creepy hallway in Brigmore Manor.

A view of one of the manor's many damaged floors.

A hole in the ceiling, making the room above visible.

Holes in the library floor.

The backyard at Brigmore Manor.

A statue of Delilah.

A swampy area in the back garden.

Part of the back yard with a view of the waterfall where the butler can be found.

Part of the back yard with a gazebo and a Delilah statue.

A locked storage shed in the back yard.

The back of the Brigmore Manor.

The top of the gazebo from the hidden path up above.

A view of trees growing in the manor's garden.

A shed in the yard.

The inside of the garden shed.

A fountain in the garden.

The yard near to the garden.

Entrance to the garden.

The waterfall behind Brigmore Manor.

Flowers in the attic of Brigmore Manor.

The patio on the roof.

Path from the roof to the front door.

Drawings in the gallery. 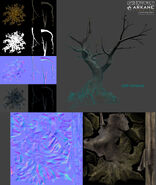 Render and texture of the trees growing around Brigmore Manor.