"Daud couldn't kill me, and you can't either!"
—Breanna during battle

Curator of the Royal Conservatory

Breanna Ashworth is a character who appears in Dishonored 2. She is the curator of the Royal Conservatory of Karnaca and one of the witches allied with Delilah Copperspoon. She is an important member of the coven and, reportedly, very dear to Delilah.

She is found with her sister witches in the Royal Conservatory during the time Emily Kaldwin or Corvo Attano journeys to Karnaca.

Breanna was born into a wealthy family. However, she did not feel loved by her family, since all she seemed to be was "an advantageous marriage", having been promised to a man three times her age. Before the marriage, Breanna fled her home, knowing freedom for the first time in her life.[1]

After Delilah was marked by the Outsider, she utilized her Arcane Bond to attract like-minded women to her. Breanna Ashworth was the first to answer her call. The two women roamed the lands, wild and free, and were later joined by others to form the coven known as the Brigmore Witches.[2] After Delilah's defeat, the remaining witches lost their powers and Breanna travelled to Karnaca where she began a new life as the Curator of the Royal Conservatory.

When Delilah fell at the hands of Daud, Breanna still remained loyal. This continued loyalty was rewarded by her being able to hear Delilah's whisperings. When it was revealed that Duke Luca Abele was also able to hear the missing witch, the two organized a ritual at Aramis Stilton's manor, inviting notables such as Kirin Jindosh and the Crown Killer to complete it. An enchanted circle was formed by the quartet, and Delilah rose once again, trapping her spirit inside of a statue, thus ensuring herself immortality.

While exploring the Royal Conservatory, it is revealed that Breanna, along with her coven of witches, killed, and possibly experimented on the previous occupants of the exhibition that once took place there. Unless Corvo or Emily cause disruption, she is first encountered conversing with Delilah via the latter's statue. The protagonist finds out she's working on the device called "The Oraculum", having had an issue with installing proper lenses. This leaves the protagonist with a choice, either simply slaying Breanna on the spot, or tampering with the Oraculum, and installing discarded lenses. If they choose the latter option, the device malfunctions once it is activated, resulting in Breanna's complete loss of supernatural abilities, along with the entire coven of witches in the area.

If Breanna has been eliminated through non-lethal means, and Karnaca hasn't been thrown into ultimate chaos, she can be seen arrested by the Grand Guard at the very end. 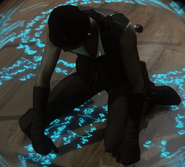 Close-up of a defeated Breanna. 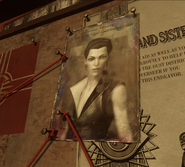 A silvergraph of Breanna Ashworth found aboard the Dreadful Wale.

A silvergraph with Breanna in.

Delilah's painting of Breanna.
Add a photo to this gallery

Retrieved from "https://dishonored.fandom.com/wiki/Breanna_Ashworth?oldid=152794"
Community content is available under CC-BY-SA unless otherwise noted.