Boo is a minor character and thug who appears in Dishonored during the mission, High Overseer Campbell.

Boo is a loyal member of the Dunwall criminal faction known as the Bottle Street Gang. Along with other members of the gang, he is tasked with keeping an eye on Bloodox Way and other streets of Dunwall that the gang have marked as their territory. Anyone who uses these byways has to pay some coin, or they will be driven off or killed, including members of the City Watch.

During the course of the mission, he and three other Bottle Street members have ambushed a lone City Watch Guard under John Clavering Boulevard and dragged his body to Gaff Street, where they attempt to divvy up the spoils.

Boo's position in the four-man crew seems to be that of a heavy, using the threat of violence to help his crew. He is usually quiet and stands back letting others do the talking while he waits to lend aid when needed.

Despite being a criminal, Boo is very loyal to his fellow Bottle Street crew and will readily dispatch those who attack or betray them. 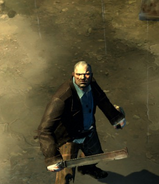 Boo watching Corvo from below. 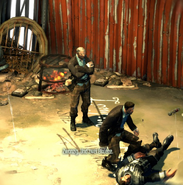 Boo waiting while his fellow thug loots a dead guard. 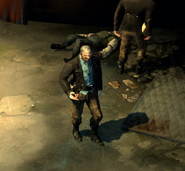 Boo after finishing off the rogue thug. 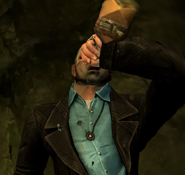 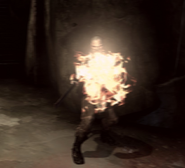 Boo breathing fire.
Add a photo to this gallery

Retrieved from "https://dishonored.fandom.com/wiki/Boo?oldid=159423"
Community content is available under CC-BY-SA unless otherwise noted.