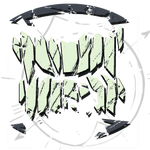 Blood Thirstyis the supernatural ability to brutally kill their enemies with the help of adrenaline.

As a result of the mark bestowed upon them by the Outsider, Corvo Attano and Daud, can uses this ability.

With tier one Blood Thirsty, Corvo can execute fatality manoeuvres on his enemies with adrenaline. The power requires two runes to unlock and only lasts a short period of time, so use it quickly. However, it recharges within one or two strikes upon the termination of the full period. Only one sync-kill is allowed before all adrenaline is used up.

With tier two Blood Thirsty, Corvo builds up adrenaline faster, and can perform a double attack, which can be used against multiple enemies within a nearby range. The time-limit is also lengthened, and adrenaline recharges more quickly. The single attack can still be used by clicking once instead of twice. The double attack does a fixed amount of damage, and will therefore not insta-kill enemies such as the Royal Executioner, unlike the single attack.

Retrieved from "https://dishonored.fandom.com/wiki/Blood_Thirsty?oldid=39363"
Community content is available under CC-BY-SA unless otherwise noted.