Described as "an industrious chap", for fifteen years Blake plied his illegal trade along the Wrenhaven River at places such as Eel's Bend, the Flooded District, and the Whale's Tooth. During this time he smuggled whale oil with a group of friends described as being twice as good as himself in a boat they owned.

He managed to keep his smuggling a secret from his sister who always looked up to him, because she thought smugglers were awful people.

During the time when Corvo Attano is trying to escape the Flooded District, Blake has found himself the leader of a group of survivors trapped within a rundown tenement building. With him are his sister, Mace Brimsley and his wife, Magnus, and two others. Trapped by arc pylons set up by the City Watch and tallboys canvassing the area, Blake manages to keep an optimistic yet realistic view.

Should Corvo speak with Blake, the Creating a Safe Haven sidequest is activated. Blake has detailed knowledge of the immediate area, and offers Corvo suggestions for a good vantage point over the courtyard in front on the tenement building. He believes his group will be killed when the floodlights are activated and asks Corvo's help to aid in his group's escape from the area. 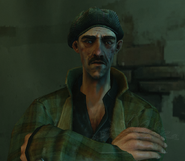 Blake in the Flooded District. 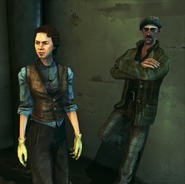 Blake thanks Corvo for his help.