The Blade Verbena is an annual sword duel festival where the greatest swordsmen from all across the Empire of the Isles demonstrate their skill in a tournament which is hosted in Karnaca.

Anyone is permitted to enter the competition. There, participants advance through a series of duels until eventually the victor of the final duel is announced the winner and is awarded a trophy for their achievement.

The Grand Serkonan Guard keeps an eye on proceedings, and a victory in the competition is enough for even a working class person to win a junior officer rank in the Guard. The Verbena is also open to viewing by general spectators, who often come from all over Serkonos.[1] 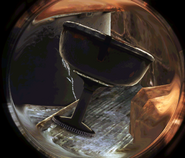 The Blade Verbena trophy awarded to Corvo.
Add a photo to this gallery

Retrieved from "https://dishonored.fandom.com/wiki/Blade_Verbena?oldid=148910"
Community content is available under CC-BY-SA unless otherwise noted.