While Dunwall has a small black market organization, on which Piero Joplin and Daud's Whalers sold items for coin in 1837, the system in Serkonos is the envy of the Dunwall underworld, and Hatters can be overheard bemoaning the lack of a similar organization in Dunwall. By the time the protagonist returns to Dunwall in the mission Death to the Empress, at least one such store exists in Dunwall, a continuation of the Serkonan branch.

The exorbitant prices caused by the Duke's tariffs has played a large part in the rise of these shops, whose own steep prices are excused when compared to the price for buying the items through legal channels, if they are one of the few items which can be purchased that way.

Black market shops can be found all over Karnaca, including at the Campo Seta Dockyards, the Aventa District, the Dust District, the Palace District, Cyria Gardens and the Upper Cyria District. One has also been set up in the Black Pony Pub in the Tower District by the time the protagonist returns there. There are also some shops in Cullero. While the shopkeepers pay off members of the Grand Serkonan Guard to avoid being shut down, and pay protection money to the Howlers to keep themselves safe, the shops still have to be set up in rather out-of-the-way locations. The symbol of two hands indicates the presence of a black market shop.

In Dishonored 2 and Death of the Outsider, upgrades either allow black market shops to sell new kinds of ammunition, improve the ammunition that black market shops sell (and the ammunition found around the world), or improve the equipment that the protagonist has, increasing their carry capacity, making them take less damage and the like. See here for Dishonored 2 upgrades and here for Death of the Outsider upgrades.

General Items (Death of the Outsider)

During the events of Dishonored 2 and Death of the Outsider, every black market shop can be entered and robbed through various ways. If the shop owner spots the protagonist, they will close the store, and thus the only way to purchase upgrades. Ammunition and other valuable items, sometimes including bone charms and runes, can still be collected.

This store is entered by the back door. The key to this door can be found in the bloodfly-infested apartment located near the store. Note that Mindy Blanchard will become hostile if she notices the protagonist attacking the shopkeeper.

After bypassing the locked apartment gate through the abandoned apartment above the shop and accessing the basement, two burglars can be overheard discussing a plot to blow up the back wall, but are lacking the required third whale oil tank. The protagonist can either find a third whale oil tank and detonate the explosion, or toss a grenade. Either of these will blow a hole in the wall, allowing access to the store. Caution must be observed if attempting a nonlethal run; the explosion of all three tanks can kill the merchant inside the shop. Detonating each tank one by one can prevent killing her.

During Dishonored 2, a crank wheel can be found just outside the store, and needs to be taken to the nearby river gate to open it, allowing access to a chain leading to a trapdoor. This trapdoor can be opened by shooting a link from a window grille next to the store. Climbing the chain gets the protagonist into the store.

During Death of the Outsider, a second store has opened up nearby, capitalizing on the chaos created when the Abbey of the Everyman sealed up the area around the Royal Conservatory. To rob this store, Billie has to access the room behind it via a balcony opposite the Conservatory. In there, she must use Foresight to travel through a rat tunnel to behind the shop's counter. By placing a Displace marker in view of the counter, Billie can swap with it when she goes to the front of the shop. In Original Game +, this place cannot be robbed without using glitches.

This shop is accessed by a code taken from a calendar in the apartment above the shop, accessible by breaking the wooden barrier blocking the door from an outside window. The code is the date (Day/Month) of the couple's marriage, the month provided by the note next to the silvergraph of the couple, and the day being the only date highlighted that month on the calendar near the door.

The shopkeeper here opens the door himself, when provided with the appropriate code phrase. After stealing the note carried by a woman behind the shop, the phrase can be found by listening to an audiograph found in a boat being used to smuggle supplies to the store, at the dock near the beginning of the mission where two workers chatting next to it. If the boat has been raided, it will instead be on a desk in a small apartment occupied by the Grand Guard, with training mannequins on the balcony, near the wall of light blocking the entrance to the Grand Palace. The code must be given to the shopkeeper from the shop's back door, and the woman behind the shop (or her unconscious body) must be present.

Out the back of the Dunwall Courier office is a key, its general location vaguely hinted at in the note Warehouse Key, found under the locked door to the basement of the Black Pony Pub. Opening this door allows the protagonist access to a hole in the black market shop's floor, and thus the store itself.

During Follow the Ink, the door is protected by a combination lock, the combination to which can be found scrawled on a blackboard just inside the door. By knocking over the sign telling customers to report theft, Billie can access a rat tunnel. Using Foresight, she can travel through the shaft and read the blackboard. Billie can also place a Displace marker when inside the shop and bypass the door entirely. In Original Game +, this place cannot be robbed in normal gameplay but the combination to the door does not change from previous playthroughs and can be used to gain access to the shop.

By the time Billie returns during the mission The Bank Job, the shop's new owner has changed the security system to a button on the inside of the door and boarded up the rat tunnel. There is a door on Ferella Way that is locked with a secure bolt. If Billie obtains the access wrench from the worker below the Dolores Michaels Deposit & Loan Bank, she can use it to undo the bolt and open the door. From there, she can use her voltaic gun to shoot the button and open the door. 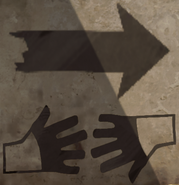 The interface presented when interacting with a black market shop.

Horatio Weatherby in his black market shop at the Campo Seta Dockyards.

The owner of the black market shop in the Lower Aventa District.

M.V. is his black market shop at Cyria Gardens.

Martha, the owner of the Dust District's black market shop.