The Big Lad is a member of the Roaring Boys Gang introduced in the first issue of the Dishonored: The Wyrmwood Deceit.

He is equipped with the stilt-legs and wooden shields of a tallboy and what appears to be a flamethrower. Proficient in the use of his specialized equipment, he is used for heavy security as well as defense of the operations of the Roaring Boys.

The Big Lad guards the dock used by the Roaring Boys in the Old Port District during their unloading of a contraband shipment. He is summoned by Sly Harold when Corvo Attano, Martha Cottings and other members of the City Watch show up to deal with the gang members. He burned most of the watchmen before being blown to pieces by a grenade thrown by Martha. 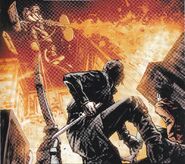 The Big Lad burns the dock as Cottings comes to Corvo's aid.
Add a photo to this gallery

Retrieved from "https://dishonored.fandom.com/wiki/Big_Lad?oldid=164466"
Community content is available under CC-BY-SA unless otherwise noted.