Time Management
Bend Time Massacre is a puzzle challenge in Dunwall City Trials. The aim is to kill as many people as possible in each round, with additional points awarded for creativity.

"Break the glass to start Bend Time and kill as many enemies as possible. Between each successive round, a bonus challenge can be attempted."

This challenge consists of six total rounds. The number of targets will vary between rounds, as will the environment they are in. The player has a limited number of each exhaustible weapon, so it is recommended that they plot out a strategy before beginning the challenge. They will be able to view the entirety of the room from outside with no time limit; the timer starts once the player breaks a window and enters the room - it will continue to count down even when the weapon wheel is open.

The game ends when the player passes all six rounds. There is no game over upon dying or dropping into the Void. A round can be completed as many times as desired, but only the first winning round will count toward the score.

The first round consists of four guards. The player is given a pistol with several rounds. The enemies can be killed easily by waiting for two to move right in front of the window, and executing these steps:

In Blunt Force Trauma, keep track of where the brick is at all times. It is not recommended to hit the oil tank, as the brick may fly somewhere that cannot be reached. The player is given ample time to complete the round.

The Execution round can be completed two ways. Because the player is given Possession, they can simply break the glass with the jar, possess the guard, and move him in front of his own bullet. Otherwise, it is possible to pick up the bullet, and shoot the guard in the head.

The second round takes place in a room with two large obstructions. There are several guards wandering around, and three nobles standing near the room's center. It is recommended that the player break the glass on the right, attack any guards with the sword, and throw a grenade toward the nobles. Otherwise, wait until the guards come close together, break the glass, throw the grenade into their group, and then dispatch the nobles quickly.

Known bonus rounds include Propaganda, in which all targets must be killed by a falling speaker, and Agenda, in which the player must kill only those with objective arrows above them.

The third round takes place in a meeting room with a large table in the center, a whale oil tank next to one of the side windows, and a speaker overhead. Shoot the speaker's wire with a bolt or bullet, then pick up the tank of oil and throw it at the table.

One of the level's known bonus rounds is Pincushion, in which the Art Dealer walks around the room. The player must shoot him with four bolts, each of which must break a pane of glass.

The other is Patience, where enemies are not to be killed before bend time ends. It is recommended to shoot the speaker, pick up the oil tank and throw it, while also throwing as many grenades as possible in different directions, so that the room-wide explosions kill everyone.

The fourth round takes place in the same rooms as round one and three, connected by two staircases. Toss a grenade to the left and throw the whale oil tank across, then stab or shoot the remaining people.

One of the bonus rounds is Surgical, where the player must kill all three Pendleton brothers.

The other bonus round is Blood for Oil, where the player must kill targets with only whale oil tanks.

The fifth round takes place in the same rooms as round one and two. For the upper room, use a sticky grenade. For the lower room, shoot the speaker.

The final round takes place in all three rooms. Shoot an explosive bullet into the lowest room, toss a grenade on the left side of the middle room, and stab targets in the upper room. 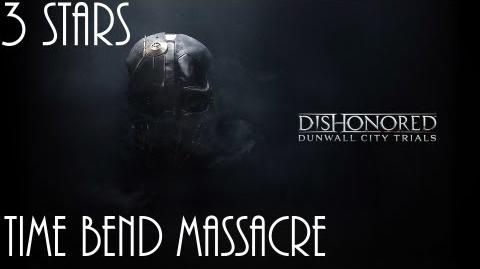 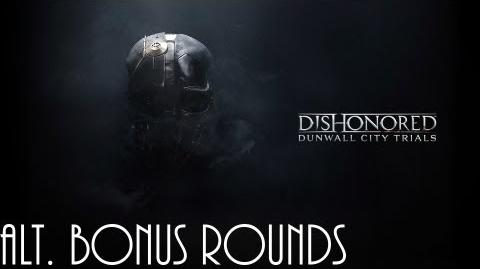 Retrieved from "https://dishonored.fandom.com/wiki/Bend_Time_Massacre?oldid=135162"
Community content is available under CC-BY-SA unless otherwise noted.