Beatrici Attano is Corvo Attano's older sister, who disappeared some time during his youth. She is first introduced in the first issue of Dishonored: The Wyrmwood Deceit.

Beatrici and Corvo hail from Serkonos. Unlike her brother, she wanted to explore the world and particularly Dunwall, dreaming of its technological advancements and industries. She disappeared one day, leaving her brother behind.

Corvo remembers his sister after saving a young boy, Milo Ridpath from the Roaring Boys Gang in the middle of a smuggling operation. To his surprise, the boy bears the same face as Beatrici. His interest in him grows even further when Corvo finds his sister's portrait in a pendant left behind by the boy while escaping. Leaving the investigation on the contraband ring to Watch Officer Martha Cottings, he starts looking for the boy and answers to Beatrici's vanishing.

Corvo learns from Milo that his sister led an adventurous life across the sea after departing from their home. The boy believes he has been taken as leverage against her and was moved around, eventually escaping to find himself in Dunwall. The witch behind the plot then reveals that the boy is a painting to which she gave life in order to eliminate Corvo Attano.

Milo leads his uncle to the husk of a whaling ship where he was last held captive, believing his mother to be there. This turns out to be an ambush laid by Broken Tom. The deceit is revealed and the boy disappears as his painting burns in a fire.

Portrait of a young Beatrici. 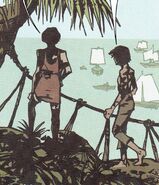 Beatrici gently laughing at Corvo's innocence.
Add a photo to this gallery

Retrieved from "https://dishonored.fandom.com/wiki/Beatrici_Attano?oldid=161940"
Community content is available under CC-BY-SA unless otherwise noted.